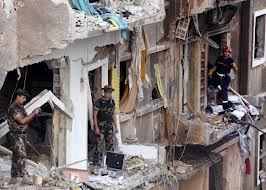 MP Michel Pharaon, a key member of the March 14 alliance said on Monday following a meeting of Ashrafieh MPs that there were more than 69 families who cannot return to their damaged residences in Beirut’s Ashrafieh because of the blast of last Friday which killed Internal Security Forces intelligence chief Wissam al-Hassan.

“Ashrafieh MPs are ready to receive calls from all the people who were affected by the blast and follow up on their situation.” he said.

Meanwhile, the Higher Relief Council said in a statement that it would “compensate the damaged residents that have been inspected by the Council ,” adding that the survey of the damages is ongoing.

Residents ( both tenants and owners ) were told to bring their ID when seeking compensation. They could either appear in person or appoint a legal representative to seek compensation.

Some residents who are skeptical of government promises of assistance, began repairing their homes and shops expressing doubt that the government would follow through with its promises.

Yasmina Jreissati, whose building backs onto Ibrahim Monzer Street, was busy replacing all of the windows in her apartment.

She decided to go ahead with repairs before hearing from the HRC.

“I don’t want to be cynical but I’m not expecting anything,” she said, explaining that her home also serves as an office for her and her husband.

She said that living in Lebanon, one never thinks that an event like this is impossible, but “you ignore it thinking it will not happen to where you live.”

Most of the residents did not reportedly know that the late Wissam al-Hassan was living in Ashrafieh, but they surely know now.