Lebanon in the pocket of Assad, says Former P.M. 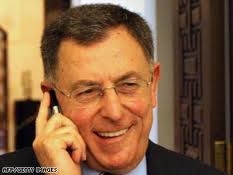 In the wake of a bombing that killed Lebanon’s intelligence chief, that country’s former prime minister is calling on his government to step down, saying that it is in the pocket of Syria’s Bashar al-Assad.

“This government has failed. It is practically dead in the real sense of the word,” Fouad Siniora told CNN’s Christiane Amanpour in an exclusive interview. “This is the best solution in order to save Lebanon from instabilities and from any attempt of the Syrian regime to create a sedition.”

Siniora has allied himself with demonstrators who blame Prime Minister Najib Mitaki for failing to prevent the attack Friday that killed Lebanon’s intelligence chief, Wissam al-Hassan.

“This government is in the hands of Syria and Iran at the same time,” he said.

Mitaki has rejected the protestors’ call, telling reporters that it is “unfair” to hold him personally responsible for the assassination.

The attack that killed Hassan is only the latest – though certainly the most serious – in a series of events that have raised concern about spillover of Syria’s sectarian conflict into Lebanon. Lebanon itself suffered a brutal, nearly 15-year-long civil war.

Siniora, who is also a member of parliament, said that he was asking U.N. troops – first deployed in the country after a 1978 war with Israel – to amass along the border with Syria.

“Throughout the past several decades, all dictators in the Arab World, they have been sending a clear message to everybody – to their people as well as to the international community – that either you let me stay in office, and do whatever I want, or the other alternative is chaos or destruction,” Siniora said. “This intimidation and threat to the international community will continue.”

Over the past months, there have been several incidents of Syrian shells landing across the Lebanese border, as well as shootouts with Lebanese border guards.

Many observers suspect that Hassan was targeted for assassination by Syria, because of his criticism of Assad, as well as his rare investigation into a Lebanese official supportive of the Syria regime.

Three days after Hassan was assassinated, does Siniora fear for his life?