March 14 youth demand Cabinet to resign during sit it 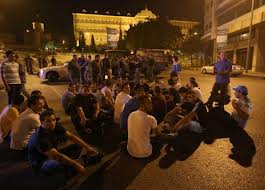 March 14 youth held an open sit-in at Martyrs’ Square Saturday to vent their outrage over the assassination of Brig. Gen. Wissam al-Hasan and to call on the government to resign.

Addressing the March 14 audience at Martyrs’ Square, Nadim Koteish, a TV host and prominent figure in the coalition, called on the Lebanese to take to the streets and join the Downtown gathering to “speak the truth.”

Another gathering is scheduled to take place in Sassine Square at 12:30 p.m. to protest the Friday car bombing in Ashrafieh that claimed the lives of eight Lebanese and the wounding of 110 others.