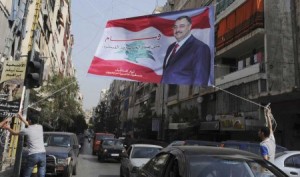 In a statement released following a meeting at Future Movement leader MP Saad Hariri’s residence, the coalition called on the Lebanese people to attend the funeral and also called for a “day of rage” to protest Hassan’s assassination and Syrian meddling in Lebanon.

Hassan will be laid to rest on Sunday at 1:00 p.m. in downtown Beirut alongside the grave of former prime minister Rafik Hariri.

“Tomorrow isn’t a regular day. It’s a day for all the Lebanese and martyrs,” Future MP Nouhad al-Mashnouq who read the statement said.

March 14 coalition demanded the immediate resignation of the cabinet and Hezbollah to hand over the suspects in former PM Hariri’s assassination.

March 14 also called on Arab League chief Nabil al-Arabi and U.N. Leader Ban Ki-moon to take “all the necessary measures to safeguard Lebanon and its people through a series of steps, in particular, the deployment of UNIFIL along the Lebanese-Syrian border under U.N. Security Council resolution 1701.”

Hassan was killed on Friday in a huge explosion that rocked the Beirut area of Ashrafieh, which left at least eight dead and 110 wounded, in the first such attack in the Lebanese capital since 2008.

Update: The family of the slain Wissam al-Hassan is expected to arrive shortly at Beirut airport on a private jet