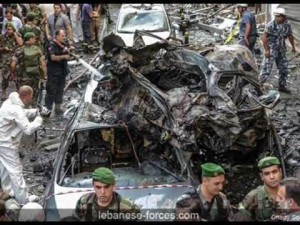 Lebanon’s prime minister linked the massive car bomb that tore through Beirut to the civil war in neighboring Syria on Saturday, the latest signal that the crisis is enflaming an already tense region.

The government declared a national day of mourning for the victims on Saturday, but protesters took to the streets, burning tires and setting up roadblocks around the country in a sign of the boiling anger over the bomb.

Lebanese Prime Minister Najib Mikati said Saturday the explosion is linked to al-Hassan’s recent investigation, in which he exposed an alleged plot by Syria to unleash a campaign of bombings and assassinations to sow chaos in Lebanon.

“I don’t want to prejudge the investigation, but in fact we cannot separate yesterday’s crime from the revelation of the explosions that could have happened,” Mikati said at a news conference following an emergency Cabinet meeting.

Lebanon’s fractious politics are closely entwined with Syria’s. The countries share a web of political and sectarian ties and rivalries, and Lebanon has been caught up in the fallout of from the civil war pitting Syrian President Bashar Assad’s forces against rebels seeking to overthrow the regime.

The countries share a web of political and sectarian ties and rivalries, often causing events on one side of the border to echo on the other. Lebanon’s opposition is an anti-Syrian bloc, while the prime minister and much of the government are seen as pro-Syrian.

Al-Hassan’s probe over the summer led to the arrest of former Information Minister Michel Samaha, one of Assad’s most loyal allies in Lebanon.

Samaha, who is in custody, is accused of plotting a wave of attacks to spread sectarian violence in Lebanon at Syria’s behest. Also indicted in in the August sweep was Syrian Brig. Gen. Ali Mamlouk, one of Assad’s highest aides. He was charged in absentia.

Mikati also said he had offered to resign after Friday’s car bomb, but the president asked him not to plunge the country into more uncertainty. Mikati said he suggested a national unity government but President Michel Suleiman asked him for some time to hold discussions with political leaders.

Mikati is facing deep political pressure from his opponents over the attack.

Friday’s violence and subsequent protests threatened to plunge Lebanon back into a dark cycle of bombings and reprisal that made the country notorious during the 1975-90 civil war.

In the eastern town of Marj angry protesters tried to storm an office of the pro-Syrian Itihad group, but Lebanese soldiers pushed them away wounding five protesters, security officials said. They added that dozens of people who marched in protest in the border town of Moqueibleh came under fire from the Syrian side of the border forcing them to disperse without any injury.

The highway linking central Beirut with the city’s international airport was closed, as well as the highway that links the capital with Syria, the officials said on condition of anonymity because they are not authorized to speak publicly.

Many of Lebanon’s Sunni Muslims have backed Syria’s mainly Sunni rebels, while Shiite Muslims have tended to back Assad. Al-Hassan was a Sunni whose stances were widely seen to oppose Syria and Shiite Hezbollah, the country’s most powerful ally in Lebanon.

Al-Hassan also played a role in the investigation of the 2005 assassination of former Lebanese Prime Minister Rafik Hariri, a powerful Sunni figure.

A U.N.-backed tribunal has indicted four members of militant group Hezbollah, which along with its allies now holds a majority in Lebanon’s Cabinet. Hezbollah denies involvement in Hariri’s killing and has refused to extradite the suspects.

Al-Hassan’s department also had a role in breaking up several Israeli spy rings inside Lebanon over the past few years, Lebanese officials said.

Member of former Prime Minister Saad Hariri’s parliamentary bloc Nuhad Mashnouk said al-Hassan’s funeral will be held in Beirut Sunday afternoon and the late general will be buried next to Hariri’s tomb.

Lebanon’s top Sunni cleric, Grand Mufti Mohammed Rashid Kabbani, condemned al-Hassan’s assassination, calling it a “criminal explosion that targets Lebanon and its people.” He called for self-restraint, saying “the criminal will get his punishment sooner or later.”

Police and army troops sealed off the site of Friday’s blast as military intelligence agents investigated what was the deadliest bombing in Beirut in four years.

Rafik Khoury, editor of the independent Al-Anwar daily, said the assassination was an attempt to draw Lebanon into the conflict in Syria, which has been the most serious threat to the Assad family’s 40-year dynasty.

“The side that carried the assassination knows the reactions and dangerous repercussions and is betting that it will happen. Strife is wanted in Lebanon,” Khoury wrote.

Sharbal Abdo, a Beirut resident who lives down the block from where the car bomb detonated, on Saturday brought his six-year-old son Chris and 12-year-old daughter Jane to see what happened the day before. They were both at school when the blast ripped through the area.

“They were very afraid yesterday, and cried a lot late into the night,” Abdo said. “Today I decided to bring them here and show what happened. They need to face this situation. It may be their future.”