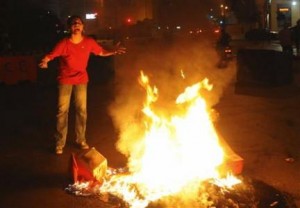 Sunni Muslims took to the streets and burned tires across Lebanon in protest against the killing of senior intelligence official Wissam al-Hassan in a car bomb on Friday, witnesses said.

Protesters, infuriated by the death of the prominent Sunni, blocked roads in the eastern Bekaa valley region, the northern area of Akkar, neighborhoods of the capital Beirut and in the southern city of Sidon.

Former Lebanese Prime Minister Saad al-Hariri accused Syrian President Bashar al-Assad – a member of an offshoot of Shi’ite Islam – of being behind the huge car bomb which killed Hassan and at least seven other people in central Beirut on Friday.

The attack has brought the violence in neighboring Syria to the Lebanese capital, confirming fears that the conflict is infecting the surrounding region.

In the coastal city of Tripoli, gunshots could be heard from the district of Bab al-Tabbaneh, a Sunni area.

Gunmen there have occasionally clashed with rivals in neighboring Jebel Mohsen, an area full of Alawites, the sect that counts Assad as a member.