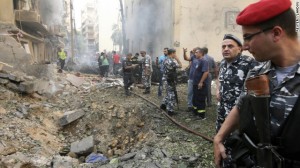 A top Lebanese intelligence official known for his anti-Syrian stance was killed Friday in a massive explosion that shattered a normally peaceful neighborhood in Lebanon’s capital, Beirut, the country’s news media reported.

The attack, which killed Brig. Gen. Wissam al-Hassan and at least two others, has heightened fears that Syria’s civil war is starting to boil over into neighboring Lebanon.

Saad Hariri, a Lebanese opposition leader and former prime minister, told CNN that he had no doubt who was responsible: Syrian President Bashar al-Assad. He accused the Syrian leader of “killing his own people” and said “he will not think twice” about killing Lebanese in order to protect himself.

“The message from Damascus today is anywhere you are, if you are against the regime from Lebanon, we will come and get you,” said Hariri, who blames the 2005 assassination of his father, former Prime Minister Rafik Hariri, on Syria’s government. “No matter what you try to do, we will keep on assassinating the Lebanese.”

Al-Hassan, the chief of the Internal Security Forces Information Branch, was a powerful Sunni Muslim figure aligned with a political movement that emerged after Rafik Hariri’s assassination and opposes Syria’s government under al-Assad. He was also leading an investigation into a Lebanese politician accused of working with two Syrian officials to plan attacks inside Lebanon.

A Lebanese political source who did not want to be named told CNN it was 99% confirmed that al-Hassan was dead. “There is an unrecognizable body found, and they have found his personal belongings at the scene,” the source said.

Al-Hassan’s killing brought a sense of deja vu to Lebanese, recalling the 2005 assassination of Rafik Hariri, which triggered the end of Syria’s occupation of Lebanon, and the turmoil that followed.

During Friday afternoon rush hour, a car bomb exploded in East Beirut’s Ashrafiyeh district, rocking the heart of the predominantly Christian area, a populous stretch replete with shops, churches and office buildings. With a significant presence of security forces, the neighborhood is “among the safest” in the city, said Aram Nerguizian, who teaches around the block from the attack site.

The massive blast created a crater of rubble near Sassine Square, tearing off the balconies of nearby apartments. Panicked and tearful residents poured out of apartments at the site, some carrying victims to ambulances. The impact left rows of mangled cars and charred buildings, and shook the windows in CNN’s offices, about a 10-minute drive from the scene.

At least one car was engulfed in flames, blackened wreckage littered the street, and windows were blown out.

The exact casualty count was unclear: Lebanon’s National News Agency said eight people died and more than 90 were injured, but it later amended the figure to at least three deaths and 110 injuries.

Lebanese politician Michel Samaha, who was at the center of one of al-Hassan’s investigations, has been accused by a military court of trying to form an armed group to spread sectarian violence in Lebanon by plotting political and religious assassinations. Two Syrian security officers also have been charged.

A controversial figure with close ties to Damascus, Samaha is currently in jail, awaiting trial.

Human rights groups, foreign governments and world leaders condemned the blast, demanded justice and called for calm. U.N. Secretary-General Ban Ki-moon, for instance, urged “all Lebanese parties not to be provoked by this heinous terrorist act and to maintain their commitment to national unity.”

The Shiite militant and political movement Hezbollah — which has a prominent role in Lebanon’s government and the U.S. government labels a terrorist organization — also criticized the blast, which it described as a”sinful attempt to target the stability and national unity.” And Syria called the attack a cowardly, “unjustifiable” terrorist act.

Yet some, including Hariri and Andrew Tabler of the Washington Institute for Near East Policy, weren’t convinced, believing Damascus is responsible either directly or indirectly for the bombing.

Many Lebanese believe al-Assad wants to promote instability in Lebanon and elsewhere to turn attention away from the 19-month long civil war in his country.

Lebanon is still recovering from its own 15-year civil war that ended in 1990. Since then, the Middle Eastern nation has been plagued by assassinations and sectarian tension among Sunnis, Shiites, Christians and others.

Prior to Friday’s blast, there had been fighting in Syria near the Lebanese border. Clashes in Tripoli, Lebanon, between supporters and opponents of Syria’s government also erupted. Yet Nerguizian, a scholar with the Center for Strategic and International Studies, calls those clashes relatively insignificant for Lebanon compared to Thursday’s bombing.

“An event like this can increase the risks of Sunni-Shiite conflict in urban centers like Beirut,” he said. “It could be a harbinger for more instability.”