US Navy Ship and Submarine Collide, no injuries reported 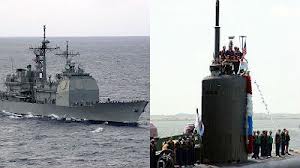 The Pentagon said late Saturday that it is investigating why a Navy submarine collided with an Aegis cruiser during routine operations at an undisclosed location.

The United States Fleet Forces Command said in a news release that the submarine Montpelier and the Aegis cruiser San Jacinto collided at about 3:30 p.m. on Saturday. No one was injured, and the extent of any damage to the vessels was not clear on Saturday evening, said Lt. Cmdr. Brian Badura of the Fleet Forces Command.

“We have had circumstances where Navy vessels have collided at sea in the past, but they’re fairly rare as to how often they do take place,” Commander Badura said.

Navy officials declined to specify how the investigation would play out or where the collision took place.

“If we do have an incident that does take place, there are folks that swing into action,” Commander Badura said.

The Navy said that the “overall damage to both ships is being evaluated,” and that the submarine’s propulsion plant was unaffected. Both Navy ships are based in Norfolk and are operating on their own power, according to the news release.