Beirut – Lebanon’s judiciary should investigate and prosecute any army and intelligence officials responsible for the beating and serious abuse of at least 72 male migrant workers on the evening of October 7 in the Beirut neighborhood of Geitawi, Human Rights Watch said today.

According to victims and other witnesses, those beaten include at least 45 Syrian , 20 Egyptian, and 7 Sudanese migrant workers.

Human Rights Watch met with 25 men, all migrants, who all said they were beaten severely. Almost all had severe bruises consistent with their statements. According to the men, uniformed members of the Lebanese army barged into the rooms where they lived and proceeded to viciously kick and beat them, before asking any questions. One man was picked up off the street while walking home. The soldiers, some reportedly wearing shirts labeled “Army Intelligence,” did not interrogate them about any specific incident or crime, but accused them of “harassing women.” 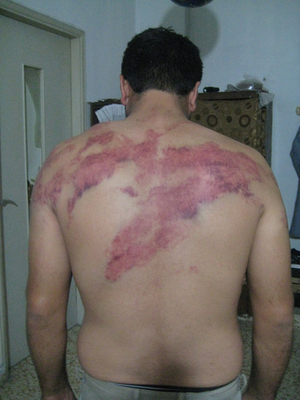 “By engaging in such a nasty and possibly xenophobic attack against migrants, these soldiers acted more like a gang than a national institution,” said Nadim Houry, deputy director of the Middle East and North Africa division of Human Rights Watch.

All those Human Rights Watch interviewed said they had valid residency papers in Lebanon.

The army left four hours after the beating and abuse. It is not clear whether the army detained any of the migrants. None of those interviewed knew of any arrest, but local residents told Human Rights Watch that they saw a group of seven migrants, their faces covered, sitting inside a military jeep. Lebanese neighbors of the migrants confirmed their accounts of the army assaults and said that they had not had any problems with the workers, some of whom have lived in Beirut’s Geitawi neighborhood for years.

The Lebanese army has not issued any statement about the attacks.

“Lebanon’s army is not above the law and the judiciary needs to immediately investigate this attack and hold those responsible to account,” said Houry.

This is not the first recent attack on migrants by soldiers. On October 1, soldiers rounded up migrants from another part of Achrafieh, according to local residents who saw them storm a construction site where migrants worked and slept and heard screams from the building.

This latest attack occurred during the evening of October 7. Soldiers deployed heavily in the Geitawi neighborhood, a middle-class neighborhood where male migrant workers, working mostly in construction, also live. Around 8:30 p.m., the army raided the apartment of three Egyptian migrant workers living near the Jesuit Garden. According to the workers, the army immediately proceeded to insult and beat them without providing any explanation for the raid or even asking for their identification papers. The army then raided neighboring houses where other Egyptian and Syrian workers were living and detained one Egyptian who was walking nearby. The army then forced all the workers to move to the rooftop of a neighboring house, ordered them to lie down, and proceeded to beat them.

I have been living in Lebanon for 17 years and never lived through anything like this. Everyone in the neighborhood knows me. I never had any problems with anyone, never looked at any woman the wrong way. Whenever I would try to ask the army what was happening, they would tell me to shut up and beat me. They just wanted to humiliate us.

The army eventually asked for their identification papers and contact details of employers. None were questioned about any incident of harassment of women. All said they had their legal papers and were allowed to leave the rooftop around 11:30 p.m. They were not aware of anyone being arrested.

At around 9:30 p.m. that same evening, in another part of Geitawi, closer to the stairs leading to Mar Mikhael, soldiers stormed nine rooms rented by Syrian and Sudanese migrants in a two-story structure. Human Rights Watch visited the premises on the following day and met 13 of the migrants. According to consistent testimonies, the army used immediate violence against the migrants from the beginning. One of the workers whose room was on the ground floor recounted,

I was just coming out of the shower when the army barged in, yelling. We are around 10 workers living in the room. We were just relaxing after a day of work. They immediately started insulting us and shouting on us to lie on the floor. They kicked us with their military rangers [boots] and beat us with cables and a broom stick they took from our bathroom. When one of us tried to ask what was going on, they would just beat us and tell us to shut up. They said, “You are harassing girls” but when we protested, they beat us up.

After about an hour, the soldiers gathered all the Syrians in the building as well as a group of Sudanese in one room on the first floor. The migrants told Human Rights Watch that they were forced to kneel one over the other, and at that point, one of the soldiers began walking on them. The migrants reenacted the position to Human Rights Watch in the room where they had been gathered.

There were at least two minors in the group of migrants, witnesses said. While Human Rights Watch was unable to interview them, the other workers said that the soldiers initially also beat them but then put them aside once they found out their age.

One Syrian migrant says he was beaten particularly viciously. The army had found a laptop in the room that he rented with others. They asked him to open the computer but he told them that it was not his and he did not know how to operate it. The army proceeded to throw water at him and beat him repeatedly with a wooden stick. Human Rights Watch saw the bruises on his back. Another Syrian, a 43-year old construction worker, had been beaten so badly that he feared he had broken one of his ribs. All workers said that they could not afford to go see a doctor but that they had been to a local clinic of the Red Cross which gave them a spray to put on their bruises.

All migrants interviewed by Human Rights Watch said that the army did not investigate any specific incident or ask about a specific individual. Despite the initial accusation of harassing women, the army did not ask about any specific incident of harassment. The army harangued some of the Syrian migrants by asking them political questions such as “Are you with `Ar`ur? [a prominent Syrian salafi sheikh close to the Syrian opposition]?”; ”Are you with Bashar’s army or the FSA?”; “What religion are you?” All those interviewed had their residency papers and the army left around 1 a.m. without arresting anyone.

Lebanese neighbors told Human Rights Watch that they tried to intervene but the army yelled at them to go indoors.