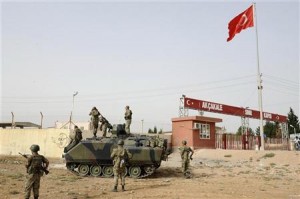 It was the sixth consecutive day of Turkish retaliation against bombardment from the Syrian side of the border, where President Bashar al-Assad’s forces are battling rebels.

The exchanges are the most serious cross-border violence in Syria’s revolt against Assad, which began in March last year with protests for reform and has evolved into a civil war with sectarian overtones which threatens to draw in regional powers.

The latest mortar round from Syria landed 150-200 meters within Turkey’s border in the district of Hacipasa at about 3 p.m. (1200 GMT), the official said.

Turkey’s armed forces have bolstered their presence along the 900 km (560 mile) border with Syria in recent days.