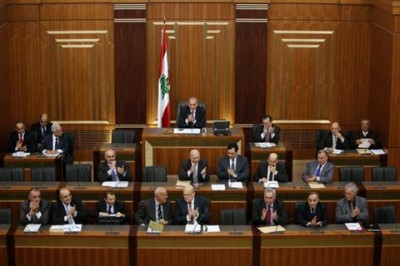 Any reasonably aware person knows very well that there are major problems domestically, are the elections going to be held on time and under which set of laws, regionally, when would the Syrian uprising manage to force Bashar Assad out of office and what kind of a regime would replace the Baath or even globally, is the EU going to pull a rabbit out of the proverbial hat, an deux ex machina, if you will or are we about to witness the total meltdown of the EU and its Euro currency. Not to mention the saber rattling between China and Japan over the status of two rocks in the ocean, the possibility of a major confrontation between Iran and Israel, The disappearance of Arctic Ice plus the real possibility of a radical climate change that will impact everyone all over the world.

In spite of all the above I have chosen to highlight the problems associated with the wages that the Lebanese parliamentarians appropriate for themselves. In a sense this is a very small issue that is not of much interest to many including the Lebanese. Had the Lebanese been well informed about government and had they been acting as responsible citizens then this would have been a non issue. Many sociologists have claimed that it is the small things that matter. Just ask any New Yorker about the Rudi Giuliani philosophy that had reinvigorated life into the greatest city in the world. He started with the squeegee kids.

What concerns us is the quality of life in the Arab world in general and the Lebanon in particular.  There aren’t many people in the world who are not familiar with the phrase the Arab Spring and the fact that it has lots of promise. Many hope that this Arab reawakening will end up in bringing forth a true democratic tradition to the Arab world. Lebanese politicians, such as our president Suleiman never lets a day go by without issuing a statement about the potential for Arab democracy and the role that Lebanon will have to play in promulgating it. Unfortunately president Suleiman forgets that he is not in a position to give lectures about democracy since he was unconstitutionally elected, people will never forget that, and that he is the president of a country whose parliament operates as if it is farm of the speaker Beri who never tires of pretending that he has created democracy. (It does predate him by 2500 years). But what is the absolute worst case is that the parliament that never meets and that rubber stamps decisions taken by instructions delivered to non elected officials keeps on pilling insult to injury by increasing its pay, its pension and its perks when the country is in a fiscal mess, an economic slowdown, a political standoff and an exploding sovereign debt.

Yes parliament members need to make two ends meet, just like any other citizen. Being a member of parliament is not meant to be wage free work. If it was then only the wealthy will be able to perform that function. But no one wants the rules and regulations that affect the life of each citizen to be dictated by the people at the top. But maybe we do. That is why the Lebanese members of parliament have one of the lowest workloads in the world. They barely meet and when they do they never discuss anything important and each represents only about 35,000 citizens. Their annual compensation in a country who’s GDP per capita is less than $10,000 when that of the German, EU, British, and French, Spanish, Portuguese Canadian, Australian and US counterpart is more or less in the same ball park. Actually most of the countries pay their parliamentarian less than Lebanon while they ask them to work harder and under much more transparent conditions. As a general rule a Member of Parliament should be limited to only twice to 2 ½ time the median household earnings. Anything above that and the legislatures will be living in a cocoon. They will not understand the realities that their constituents have to deal with on a daily basis. But in Lebanon this does not appear to be a problem. Our MP’s get maybe six times what the mean household income receives which explains why they live in a world of their own making. Their children do not go to public schools and they do not have to worry about social security since they have their own tight social safety net in the form of a generous pension. When confronted with the question that some constituents are finding it difficult to by bread they typical response” Let them get biscuits”. What is truly shameful is that the Lebanese press has not made an issue of any of this.

Addendum: The following graph should illustrate the above point about being overpaid and underworked.