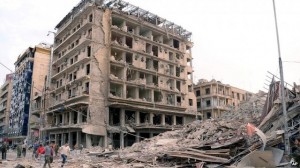 At least 31 people have been killed and dozens wounded by five bomb explosions in the centre of Syria’s second city, Aleppo, officials have said.

Four of the blasts happened in the city’s Saadallah al-Jabari Square, near a military officers’ club and a hotel.

Pro-government al-Ikhbariya TV broadcast pictures of bodies being pulled out of buildings damaged by the blasts and a large crater in a road.

Government forces have been fighting rebels for weeks for control of Aleppo.

On Tuesday, Hezbollah’s al-Manar TV and the Lebanese newspaper al-Diyar, which backs the Syrian government, both reported that Syrian President Bashar al-Assad had ordered thousands more troops sent to Aleppo to finish the battle against the rebels there.

Al-Diyar said Mr Assad was flown to Aleppo by helicopter and was personally directing the campaign, though that has not been confirmed.

State and pro-government media reported that at least three of the four blasts in Saadallah al-Jabari Square on Wednesday morning were suicide car bombings. The fifth bomb reportedly exploded a few hundred metres away, on the edge of the Old City near the Chamber of Commerce.

Some buildings had their facades completely ripped off; others were virtually demolished by the blasts, leaving huge piles of rubble and debris, and craters in the road.

Bodies were shown being carried away with blankets being used as stretchers. Many of the casualties were said to be civilians.

State TV reported that after the explosions, two or three “terrorists” appeared, wearing military uniforms and explosive vests. However, they were shot dead before they could carry out any attack, it said.

Photographs of the assailants’ bodies were published by the state news agency, Sana.

The Syrian Observatory for Human Rights, a UK-based activist group, said the blasts had occurred near the Officers’ Club. Al-Manar said the third bomb had targeted City Hall and the al-Amir hotel.

“It was like a series of earthquakes,” a resident who did not want to be named told the Associated Press. “It was terrifying, terrifying.”

He said the officers’ club and the hotel were almost completely destroyed.

Officials said the death toll might rise and the Syrian Observatory – which says its reports are impartial, though its information cannot be verified – cited medical sources as saying that at least 40 people had died.

The government says scores of people have died in a series of “terrorist” bombings in Syria’s main cities, many of them targeting security facilities, since the uprising against President Assad began in March 2011.

Opposition activists, however, maintain that the security forces planted the bombs to discredit both the rebels and the peaceful protesters.

One activist in Aleppo, Mohammed Saeed, said there were questions about Wednesday’s bombings.

“The area is heavily fortified by security and the presence of shabiha,” he told AP, referring to pro-government militiamen. “It makes you wonder how car bombs could reach there.”

Analysts say this is not beyond the realms of possibility, but that radical Islamist militants are known to be operating in Syria. A shadowy group called the al-Nusra Front has said it was behind several bombings.