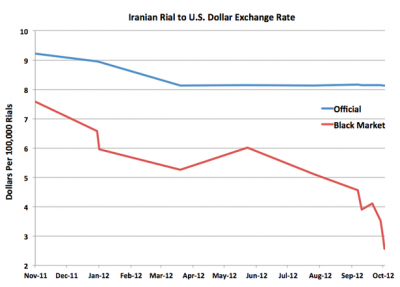 Starting in December, we’ve threatened to blacklist any financial institution that deals with the Iranian central bank — in other words, force banks to choose between doing business with us and with them. The Iranian central bank is the middleman for its oil sales, so a ban on it is effectively a ban on buying oil from Iran. Now, these sanctions haven’t cut Iran off from the world completely — it has resorted to back room barter deals — but they have cut Iran off from foreign exchange. Iran can’t earn dollars if it can’t sell oil — at least not for cash. And that has sent the rial tumbling down.

That tumble turned into a free fall this past week. The Iranian regime can thank its “foreign exchange centers” for that. As Rick Gladstone of the New York Times points out, the regime recently established special — read: better — foreign exchange rates for importers of essentials like food and medicine. It makes sense to prioritize foreign exchange when you’re running low on it, but it doesn’t make sense to signal that you’re prioritizing it. You might as well tell everybody to panic. Well, that’s what everybody has done in Iran regardless. Nobody wants to be the last one stuck holding rials — just like nobody wants to be the last one out the door during a bank run — so they dump rials for whatever they think will be a better store of value. Which is pretty much anything. But the damage doesn’t end there. The faster the currency collapses, the faster inflation picks up. Saving becomes futile. So does pretending you have a real economy.