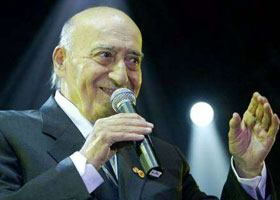 He has reportedly been admitted to the intensive care unit at Mount Lebanon Hospital.

Safi , born as Wadih Francis in Niha, Shouf , Mount Lebanon, in 1921 is a famous Lebanese singer, songwriter, and actor. He is considered a Lebanese cultural icon, and is often called the “Voice of Lebanon”. Safi started his artistic career at the age of seventeen.