Syrian troops destroyed the house of a Lebanese citizen 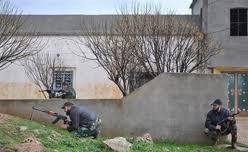 Shelling from Syria into Lebanon and cross-border gunfire have become regular occurrences.

This development comes as Hezbollah, the Lebanese Shiite political and militant group, has reportedly increased its support for the Syrian government, sending in military advisers to aid in the bloody struggle against the opposition, according to officlas.