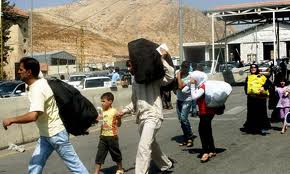 The United Nations and its humanitarian partners issued a revised appeal today for US$487.9 million to support Syrian refugees. The Regional Response Plan for Syrian Refugees outlines the plans of 52 humanitarian organizations, led by the UN refugee agency (UNHCR), to help the rapidly increasing numbers of Syrian refugees in Jordan, Lebanon, Iraq and Turkey.

There are 294,000 Syrian refugees registered or awaiting registration in neighbouring countries, compared to 41,500 Syrians in March. This seven fold increase has brought about a surge in the humanitarian response and a vastly expanded plan of action to respond to the needs of Syrian refugees as well as future arrivals.

Every day, two to three thousand refugees are crossing into neighbouring countries.

“Many refugees are arriving with only the clothes on their backs,” said Panos Moumtzis, UNHCR’s Regional Coordinator for Syrian Refugees. “Some have been displaced many times before leaving Syria. They need humanitarian assistance from day one.”

The continued violence in Syria has prompted humanitarian agencies to prepare for a further increase in the numbers of refugees, taking into account the impact on refugee hosting countries and communities. Whereas the March appeal projected an estimated 100,000 Syrians becoming refugees by the end of 2012 (a number that was surpassed in July), this appeal estimates that there may be up to 700,000 Syrian refugees in neighbouring countries by the end of the year.

“Jordan, Lebanon, Iraq and Turkey have set the example, keeping their borders open for Syrians fleeing violence. The neighbouring countries cannot do this alone. The international community must continue to demonstrate solidarity,” said Moumtzis.

Humanitarian agencies have scaled-up assistance in response to the increase in numbers and needs of refugees, with an increasing sense of urgency to prepare for the winter months, with half the Syrian refugee population living in refugee camps, the majority in tents.

The World Food Programme (WFP) supports the distribution of food to Syrians in camps and among hosting communities in all four neighbouring countries.

Women and children make up 75 per cent of the refugee population. Education and health care are both priorities in the plan.

“The race is really on to ensure that all Syrian refugee children are in school, fully immunized and properly clothed for the cold weather that’s fast approaching,” said Maria Cavilis, UNICEF Regional Director for the Middle East and North Africa. “UNICEF is ready to provide this support, but what is missing is the funding.”

This revised Regional Response Plan includes 42 national and international NGOs, who were represented at the launch of the appeal by Michael Penrose, Humanitarian Director of Save the Children International.

“NGOs are at the forefront of the delivery of humanitarian assistance to refugees and host communities across the region, but we need far more support to deal with the number of refugees, which is growing daily,” said Penrose.

Funding for the Regional Response Plan for Syrian Refugees stands at 29 per cent, that is US$141.5 million received to date.