Freed Lebanese hostage given a hero’s welcome in Beirut 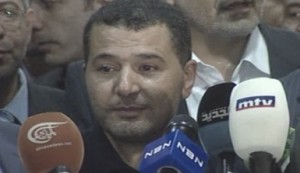 The freed Lebanese Shiite hostage Awad Ibrahim was given a hero’s welcome when he arrived at Rafik Hariri International airport in Beirut on Wednesday and in the Southern Suburb of Dhahiya where he was met with fireworks to celebrate his return.

Interior Minister Marwan Charbel who was at the airport to welcome Ibrahim expressed his gratitude to former PM Saad Hariri and “the Turkish authorities” over their positive roles in releasing the Lebanese hostages in Syria.

Last May, 11 Shiite pilgrims were abducted in Syria’s Aleppo while returning from a pilgrimage in Iran. Later in the month, a previously unknown armed group calling itself the “Syrian Revolutionaries—Aleppo Province” said that it was holding the group, while the Free Syrian Army had repeatedly denied its involvement in the abduction.

Abu Ibrahim , the spokesman for the abductors told LBCI that the 9 remaining hostages are “a special case” both on the political and security levels “since they are affiliated with Hezbollah.”

The abductors are insisting on an apology from Hezbollah Secretary General Sayyed Hassan Nasrallah, as a condition for releasing the remaining hostages.

Former Lebanese Prime Minsiter Saad Hariri on Wednesday telephoned Ibrahim  to congratulate  him on his release and  and voiced hope that the rest of the Lebanese hostages would be released “as soon as possible,” safe and sound,   National News Agency reported