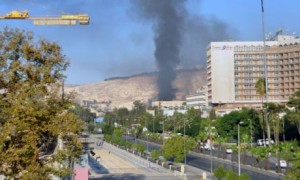 The information minister, Omran Zoubi, said the blasts were caused by two roadside bombs, adding that one of them may have been placed inside the grounds of the army headquarters, and that there had been “material” damage.

The explosions went off minutes apart just before 7am local time near the landmark Omayyad square in Damascus, shattering the windows of nearby buildings, and were heard several miles away.

Columns of thick black smoke covered the Syrian capital and ambulances were rushed to the site of the explosions as police sealed off the area to traffic.

Damascus has been hit by a series of car bombs and roadside bombings in the past few months, as the uprising intensifies against Bashar al-Assad’s regime.

Syria’s unrest began in March 2011 when protests calling for political change met a violent government crackdown. Many in the opposition have since taken up arms as the conflict has turned into a civil war that activists claim has caused the deaths of nearly 30,000 people.

On 18 July rebels penetrated the heart of Syria’s power elite, detonating a bomb inside a high-level crisis meeting in Damascus that killed three top regime officials, including Assad’s brother-in-law and the defence minister.

The explosions on Wednesday were followed by gunfire, witnesses said, suggesting security forces clashed with gunmen in the high-security area.