Freed hostage to be handed over to 2 Lebanese officers 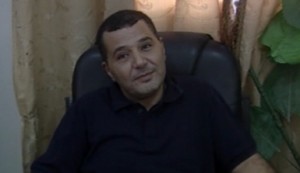 Interior Minister Marwan Charbel told LBCI that a Lebanese officer from the General Security Directorate and another one from the Ministry of Interior will be heading to Ankara on Wednesday dawn to receive the released Lebanese pilgrim Awad Ibrahim.

Ibrahim has already entered the Turkish territory through the Kilis border crossing, in a car belonging to the Turkish intelligence.

Ibrahim told LBCI that the rest of the hostages were in good health, adding that he spent last night at Abu Ibrahim’s place.

“Yesterday, I had a health setback and they told me that they were going to take me to the doctor ; then I was surprised at the decision of my release”, he said adding “Abu Ibrahim was very hospitable; we were his guests and he made us feel at home.”

Awad Ibrahim extended his thanks to the Association of Muslim Scholars represented by Sheikhs Hassan Katerji and Salem al-Rafei, for their assiduous efforts leading to his release. He also thanked Turkish PM Recep Tayyip Erdogan, former PM Saad Hariri and MP Okab Sakr for their contribution in his release.

Asked on the fate of the rest of the Lebanese hostages, Ibrahim said “Thank God all of them are in good health; honestly the abductors want Hezbollah Secretary General Sayyed Hassan Nasrallah to apologize officially to the Syrian people; only then, Abu Ibrahim will be satisfied.

Abu Ibrahim told LBCI that the case of the 9 remaining Lebanese abductees has been closed after he met the request of the Turkish authorities and the Lebanese-Qatari Committee.

“Hussain Omar was released upon the request of the Association of Muslim Scholars and his family; as for Awad Ibrahim, I chose to free him because he was sick”, he said, pointing out that the rest of the abductees are “a special case” both on the political and security levels “since they are affiliated with Hezbollah.”

Ibrahim’s wife told LBCI following the release of her husband that words fail to describe her feeling, hoping that the rest of the hostages will be freed soon. She thanked LBCI and the Lebanese media for their active contribution.

Last May, 11 Shiite pilgrims were abducted in Syria’s Aleppo while returning from a pilgrimage in Iran. Later in the month, a previously unknown armed group calling itself the “Syrian Revolutionaries—Aleppo Province” said that it was holding the group, while the Free Syrian Army had repeatedly denied its involvement in the abduction.