Christian-Muslim Summit at Bkirki to kick off at 10:30 am 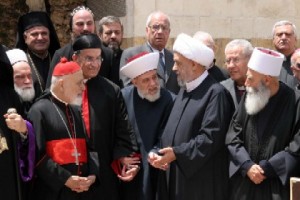 A Christian-Muslim spiritual summit that will be held in Bkirki is expected to kick off at 10:00 on Monday .

The summit is expected to tackle the deteriorating standard of living in the country , the visit of Pope Benedict XVI earlier in the month and insults to the Prophet Mohammed, according to a report by the An Nahar newspaper.

The pope visited Lebanon from Sept. 14-16. He was well received throughout his stay in Lebanon.

A U.S.-made film which mocks Islam has sparked widespread anger throughout the country