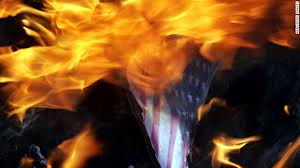 Protests against an anti-Islam film produced in the United States and French cartoons mocking Islam have intensified in Lebanon as Muslims,( both Sunnis and Shiites) took part in protests on Friday to vent their anger.

In Sidon, Sunni clerics called “a day of rage” against insults to the Prophet Mohammed but urged followers to contain their anger to inside the mosques.

The Sunni authority for Sidon and several clerics in the northern city of Tripoli called on Saudi Arabia and Egypt’s Al-Azhar – the highest authorities in Sunni Islam – to issue a fatwa condoning the murder of anyone associated with the film and for those who denigrate Islam or its prophet.

In a related development , thousands of supporters of the militant Shiite movement Hezbollah took to the streets after Friday prayers in the eastern city of Baalbek according to local reports.