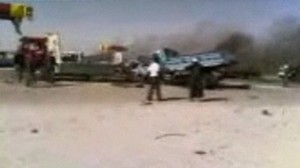 A Syrian warplane has attacked a petrol station in the north-east of the country, killing at least 30 people, opposition activists say.

A rebel group said people had been queuing for petrol and diesel near Ain Issa at the time.

The village is some 20 miles (32km) from the Tal al-Abyad border post, seized by rebels on Wednesday after a lengthy battle with government forces.

The number of casualties was expected to rise, reports said.

Unverified footage posted online showed several charred vehicles and one activist group said 70 wounded people had been taken to hospital in the nearby town of Raqqa.

One activist told AFP news agency that the filling station was the only one still operating in the area and had been crowded at the time of the explosion.

A barrel of explosives was dropped on the petrol station, opposition activists said, causing a huge explosion and fire.

The use of hugely destructive but crude bombs involving a barrel packed with explosives has become increasingly common, he says.

It is often impossible to verify the circumstances and the extent of casualties involved in attacks in Syria because reporters are unable to travel around the country.

But the burned-out pick-up trucks and a smouldering tractor seen in the video indicated a recent attack.

There were conflicting reports earlier when a military helicopter was said to have crashed in the suburb of Douma, north-east of the capital, Damascus.

Syrian state media reported that the helicopter’s rota had clipped the tail of a Syrian Arab Airlines plane carrying 200 passengers. The plane was then said to have landed safely at Damascus airport.

All passengers on board the plane were unharmed, reports said.

Initially, opposition activist group the Syrian Observatory for Human Rights said rebels had shot down the helicopter but that claim was not repeated elsewhere.

The government has increasingly used helicopters and planes in its fight against the rebels and activists reported clashes in the Douma area at the time.

Last month, rebels said they shot down a helicopter on the outskirts of Damascus.

Clashes were reported on Thursday across Syria, including Damascus and the second city, Aleppo.

Government forces were said to have overrun several districts in the south of Damascus where rebels have been holding out, the BBC’s Jim Muir reports from neighbouring Lebanon.

In the Dutch political capital, The Hague, a group of financial experts, foreign diplomats and Syrian defectors was meeting to look for new economic ways of weakening Syrian President Bashar al-Assad’s grip on power.

The group, called the Friends of Syria, was discussing how to make sanctions on the Syrian government more effective and how to track down the Assad government’s hidden financial assets.

Dutch Foreign Minister Uri Rosenthal at the meeting said that one of the problems was that not all countries implemented sanctions on Syria.

Abdo Husameddin, a former Syrian oil minister who defected from the regime in March, told the BBC President Assad’s extended family may have billions of dollars hidden abroad.

“They are talking about probably more than $10bn (£6.2bn). And there are some other faces in fact hidden beside the regime itself. So all of this money is not directly under the name of Assad himself, but by other names.”

On Wednesday, the foreign minister of Iran, Syria’s close regional ally, held talks with President Assad, who told him that the attack his country was facing was not just against Syria, but also against its alliance with Iran and Hezbollah.

The UN estimates that the conflict has left at least 20,000 people dead.