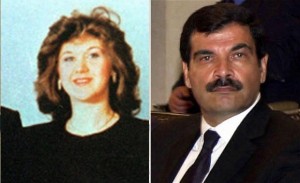 Bushra al-Assad, the sister of the embattled Syrian President Bashar al-Assad, has fled Syria with her children, weeks after her husband Assef Shawkat, who was the deputy chief of staff of the Syrian Armed Forces, was killed by the opposition forces in July 18, 2012, an informed source told Al Arabiya on Tuesday.

Opposition website www.All4Syria.info reported on Sunday that Bushra had left Syria to Dubai, where she enrolled her children at school. The website, which is owned by opposition figure Ayman Abdulnoor, reported that Bushra had previously lived in the UAE during a brief rift with her brother, Bashar.

Pro-Syrian Lebanese Arabic daily newspaper, Ad-Diyar, had also reported that Bushra, a pharmacist, was preparing to travel to Dubai; but didn’t clarify if that would be her final destination.

The Syrian source, who spoke to Al Arabiya English on condition of anonymity, said Bushra had escaped Syria amid reports of “rising disputes” within the Alawite sect, to which the president and the vast majority of his powerful military, intelligence, and government figures belong.

Following the death of her husband Shawqat, who was also the former head of the Syrian Military Intelligence, Bushra grew more worried about her own and her children’s safety, the source said, adding that a “Quasi-Coup taking place” within the ranks of the Alawite leaderships has prompted Bushra to flee the country.

The source said “some Alawite leaders are worried that the whole sect would eventually be implicated by President Assad in crimes against civilians,” adding that this has made some of them turn against him and that a “front of Alawite officers” has been formed to liaise with the Free Syrian Army and help overthrow the regime.

The source said Bushra has fled the country fearing that she could be the target of other Alawite brethren, who were implicated by her husband in the killing of civilians.

The July 18 attack that killed her husband also killed two other members of the government’s six-member crisis council.

The president’s brother Maher al-Assad was reportedly wounded and lost a leg in the bombing. Subsequent reports suggested that he might have died in a Russian hospital. The Syrian information ministry denied the reports as “baseless and falls within the framework of desperate psychological warfare.”

Who is who in the Assad family

Hafez Assad — Born to a poor Alawite family in 1930, he rose in the ranks of the military to become commander of the Air Force. Lost the Golan Heights to Israel in the Six-Day War in 1967. Seized control of country in 1970 coup. Ordered a massacre against Sunni Muslims during the Muslim Brotherhood uprising in Hama 1982, which killed an estimated 20,000 people.

Bashar Assad — President of the Republic of Syria. Age 47. Wife Asma Assad. Three children. Studied to become an eye doctor before he was made president by the Assad family regime in 2000. Ordered military operations against uprising that began March 2011. Activists estimate at least 20,000 dead.

Anisa Assad — Mother of Bashar Assad. Brought power and wealth to her family, the Makhloufs, through her marriage. In her late 70s, she’s believed to be an important figure in the running of the regime.

Bushra Assad — Sister of Bashar Assad. Age 51. Widow of top security chief Assef Shawkat, who was killed in a bombing in Damascus in July. Oldest of five children born to Hafez and Anisa Assad.

Asma Assad –Wife of Bashar Assad. Age 37. Born in London to Syrian parents. Graduated from King’s College with degrees in computer science and French literature. An investment banker in London before marrying.