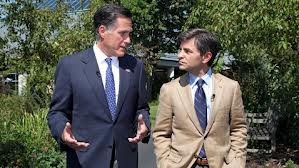 US presidential candidate Mitt Romney on Friday denounced an anti-Muslim film that is stirring unrest in the Middle East, even as he stood by his condemnation of the U.S. Embassy in Cairo for its implied denunciation of the film.

Speaking to George Stephanopoulos of ABC’s Good Morning America, Romney said he still believed it was “inappropriate” for the embassy to put out the statement, issued as anger rose in Egypt on Tuesday over a film that ridiculed the Muslim prophet Muhammad. He said the embassy should have taken the statement down after protesters breached the embassy grounds. The same day, attackers in Libya stormed a U.S. consulate and killed four foreign service officers, including the ambassador, J. Christopher Stevens.

The Cairo embassy’s news release said the United States “condemns the continuing efforts by misguided individuals to hurt the religious feelings of Muslims – as we condemn efforts to offend believers of all religions. ” It added: “We firmly reject the actions by those who abuse the universal right of free speech to hurt the religious beliefs of others.”

Romney has said it amounted to sympathizing with America’s attackers. He blamed President Obama, although he conceded that Obama had also distanced himself from the statement.

Asked about the film itself, Romney said he hadn’t seen it and had no intention of doing so. Still, he seemed to agree with much of the substance of the embassy’s statement.

“And the idea of using something that some people consider sacred and then parading that out a negative way is simply inappropriate and wrong,” he said. “And I wish people wouldn’t do it. Of course, we have a First Amendment. And under the First Amendment, people are allowed to do what they feel they want to do. They have the right to do that, but it’s not right to do things that are of the nature of what was done by, apparently this film.”

The precise origins of the film remain murky, but it was apparently made in the United States and has been championed by an anti-Muslim pastor from Florida, Terry Jones.

Romney said of Jones: “I think him making it, promoting it, showing it, is disrespectful to people of other faiths. I don’t think that should happen. I think people should have the common courtesy and judgment – the good judgment – not to be – not to offend other peoples’ faiths. It’s a very bad thing, I think, this guy’s doing.”