U.S. Envoy to Libya Is Killed by an armed mob 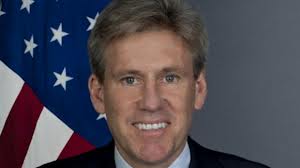 The United States ambassador to Libya, Christopher Stevens, was killed along with three of his staff in an attack on the American Consulate in Benghazi Tuesday night by an armed mob angry over a short American-made video mocking Islam’s founding prophet, the White House and Libyan officials said on Wednesday.

In a statement confirming the four fatalities, President Obama said he strongly condemned the killing — the first death of an American envoy abroad in more than two decades — and had ordered increased security at American diplomatic posts around the world.

The attack at the compound in Benghazi was far more deadly than administration officials first announced on Tuesday night, when Secretary of State Hillary Rodham Clinton said one American had been killed and one injured.

Mr. Obama’s statement did not disclose details of the attack. The ambassador, Christopher Stephens, arrived in Libya earlier this year after serving as an envoy to the Libyan rebels who overthrew Libya’s leader, Mohamar el-Qaddafi last year. The other three killed were not immediately identified.

‘“While the United States rejects efforts to denigrate the religious beliefs of others, we must all unequivocally oppose the kind of senseless violence that took the lives of these public servants,” Mr. Obama said, calling Mr. Stevens “a courageous and exemplary representative of the United States” who had “selflessly served our country and the Libyan people at our mission in Benghazi” and, as ambassador, “supported Libya’s transition to democracy.”

“The brave Americans we lost represent the extraordinary service and sacrifices that our civilians make every day around the globe. As we stand united with their families, let us now redouble our own efforts to carry their work forward,” the statement said.

The killingsthreatened to upset Washington’s relations with the new Libyan government that took over after the ouster of Col. Muammar el-Qaddafi and sour American public opinion about the prospects of the democratic opening of the Arab Spring.

Mr. Stevens, a veteran of American diplomatic missions in Libya, served in Benghazi during the uprising against Colonel Qaddafi, and he was widely admired by the Libyan rebels for his support of their struggle.

The news of his death emerged on Wednesday after violence spilled over the American consulate in Benghazi and demonstrators stormed the fortified walls of the United States Embassy in Cairo.

Few details of the events in Benghazi were immediately available, but the killing of the ranking American official in Libya raised questions about the vulnerability of American officials at a time when the profound changes sweeping the Arab world have hardly dispelled the rage against the United States that still smolders in pockets around the region.

Tuesday’s violence came on the 11th anniversary of the terrorist attacks of Sept. 11, and were inspired by Egyptian media reports about a 14-minute trailer for the video, called “Innocence of Muslims,” that was released on the Web.

Earlier, an unidentified Libyan official in Benghazi told Reuters that the American ambassador in Libya and three other staff members were killed in Benghazi “when gunmen fired rockets at them.” It was not clear where in the city the attack took place. The Libyan official said the ambassador was being driven from the consulate building to a safer location when gunmen opened fire, Reuters said.

In a message on Twitter, Deputy Prime Minister Mustafa Abu Shagur of Libya said on Wednesday that he condemned “the cowardly act of attacking the U.S. consulate and the killing of Mr. Stevens and the other diplomats.”

In Italy, the Corriere della Sera newspaper Web site showed images of what it said was the American Consulate in Benghazi ablaze with men carrying automatic rifles and waving V-for-victory signs, silhouetted against the burning buildings. One photograph showed a man closely resembling Mr. Stevens apparently unconscious, his face seeming to be smudged with smoke and his eyes closed.

Mr. Stevens arrived in Tripoli in May 2012, as United States Ambassador to Libya, according to the State Department Web site, after serving two previous terms in Libya since 2007 as an American envoy before and after the 2011 revolution that overthrew Col. Muammar el-Qaddafi.

Mr. Stevens, conversant in Arabic and French in addition to English, worked at the State Department since 1991 after a spell as an international trade lawyer in Washington. He taught English as a Peace Corps volunteers in Morocco from 1983 to 1985, the State Department Web site said. The immediate cause of the anti-American outburst was the trailer of an amateurish, American-made video, which opens with scenes of Egyptian security forces standing idle as Muslims pillage and burn the homes of Egyptian Christians. Then it cuts to cartoonish scenes depicting the Prophet Muhammad as a child of uncertain parentage, a buffoon, a womanizer, a homosexual, a child molester and a greedy, bloodthirsty thug.

The trailer was uploaded to YouTube by Sam Bacile, whom The Wall Street Journal Web site identified as a 52-year old Israeli-American real estate developer in California. He told the Web site he had raised $5 million from 100 Jewish donors to make the film. “Islam is a cancer,” Mr. Bacile was quoted as saying.

The video gained international attention when a Florida pastor began promoting it along with his own proclamation of Sept. 11 as “International Judge Muhammad Day.”

In a statement on Tuesday, the pastor, Terry Jones of Gainesville, Fla., called the film “an American production, not designed to attack Muslims but to show the destructive ideology of Islam” and said it “further reveals in a satirical fashion the life of Muhammad.”

He said the embassy and consulate attacks illustrated that Muslims “have no tolerance for anything outside of Muhammad” and called Islam “a total deception.”

Mr. Jones inspired deadly riots in Afghanistan in 2010 and 2011 by first threatening to burn copies of the Koran and then burning one in his church. He also once reportedly hanged President Obama in effigy.

In Benghazi on Tuesday, protesters with automatic rifles and rocket-propelled grenades attacked the United States Consulate and set it on fire, Libyan officials said. Some news reports said American guards inside the consulate had fired their weapons, and a brigade of Libyan security forces arriving on the scene had battled the attackers in the streets as well.

Secretary of State Hillary Rodham Clinton confirmed late Tuesday that a State Department officer had been killed in the Benghazi attack, and she condemned the violence. “Some have sought to justify this vicious behavior as a response to inflammatory material posted on the Internet,” she said. “The United States deplores any intentional effort to denigrate the religious beliefs of others. But let me be clear: There is never any justification for violent acts of this kind.”

The death in Benghazi appears to be the first such fatality in a string of attacks and vandalism against foreign and especially Western diplomatic missions in Libya in recent months. Since the fall of Colonel Qaddafi, Libya’s transitional government has struggled to rebuild an effective police force, control the weapons that have flooded the streets and restore public security.

In Cairo, thousands of unarmed protesters gathered outside the embassy during the day. By nightfall, some had climbed over the wall around the embassy compound and destroyed a flag hanging inside. The vandals replaced it with a black flag with an Islamic profession of faith — “There is no god but God, and Muhammad is his prophet” — favored by ultraconservatives and militants.

Embassy guards fired guns into the air, but a large contingent of Egyptian riot police officers on hand to protect the embassy evidently did not use their weapons against the crowd, and the protest continued, largely without violence, into the night.

A spokesman for the Muslim Brotherhood, the mainstream Islamist group and the sponsor of Egypt’s first elected president, Mohamed Morsi, urged the United States government on Tuesday to prosecute the “madmen” behind the video, according to the English-language Web site of the state newspaper, Al Ahram.

The spokesman asked for a formal apology from the United States government and warned that events like the video were damaging Washington’s relations with the Muslim world. He also emphasized that any protests should remain peaceful and respect property.

There should be “civilized demonstrations of the Egyptian people’s displeasure with this film,” the Brotherhood spokesman said, according to the newspaper Web site. “Any nonpeaceful activity will be exploited by those who hate Islam to defame the image of Egypt and Muslims.”

Bracing for trouble before the start of the protests here and in Libya, the American Embassy released a statement shortly after noon that appeared to refer to Mr. Jones: “The United States Embassy in Cairo condemns the continuing efforts by misguided individuals to hurt the religious feelings of Muslims — as we condemn efforts to offend believers of all religions.” It later denounced the “unjustified breach of our embassy.”

Apparently unaware of the timing of the first embassy statement, the Republican presidential candidate, Mitt Romney, put out a statement just before midnight Tuesday saying, “It’s disgraceful that the Obama administration’s first response was not to condemn attacks on our diplomatic missions, but to sympathize with those who waged the attacks.” Mr. Romney also said he was “outraged” at the attacks on the embassy and consulate.

Responding to Mr. Romney’s statement, Ben LaBolt, an Obama campaign spokesman, said, “We are shocked that, at a time when the United States of America is confronting the tragic death of one of our diplomatic officers in Libya, Governor Romney would choose to launch a political attack.”