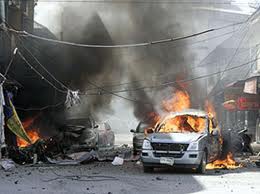 The bombs targeted makeshift barracks and the military police headquarters, situated in two adjacent sealed off districts in the centre of the city, said several residents and opposition campaigners from Aleppo.

The state news agency said an explosion near a hospital and a school in the Municipal Stadium district killed 17 people and wounded at least 40. Residents said the facilities were used to house soldiers fighting an 18-month uprising against Assad.

“The army had taken over the neighborhood and emptied it from residents. The hospital was turned into army barracks,” said activist Ahmad Saeed.

A woman living near the area said the casualty figure “appeared to be over 100”, judging from the number of ambulances ferrying the wounded and dead from the area.

The Noble Aleppo brigade of the Free Syrian Army said in a statement it carried out the Muncipal Stadium district attack, killing or wounding 200 troops. It said the bombs were planted inside the buildings in cooperation with a loyalist sympathizer.

Syrian warplanes earlier bombed a residential district to the east after rebels overran army barracks there, killing and wounding dozens of people and exacerbating a water shortage in Syria’s biggest city after a pipeline burst, activists said.

Assad has resorted increasingly to aerial bombardment to keep rebels fighting to overthrow him in check after they took control of residential neighborhoods and made forays into the centre of Aleppo, Syria’s commercial and industrial capital.

The uprising has polarized global powers, preventing effective international intervention, and is turning increasingly sectarian with the risk of spillover into adjacent Arab states with similar communal divisions.

Insurgent advances have forced Assad to deploy warplanes, major armored forces and thousands of troops to prevent the fall of Aleppo, which would free up supply lines to the interior of Syria from Turkey where rebels have sheltered.

Decisive victory has eluded both sides, with rebels lacking heavy weapons needed to down aircraft and knock out artillery and Assad loath to send conscript troops of questionable loyalty into cities to re-establish dominance on the ground.

Instead, government forces have been bombarding population centers to try to turn residents against rebels dug in there, according to diplomats following the revolt.

Sunday’s air raid destroyed a residential complex in the Hananu neighborhood, one of several in eastern Aleppo under rebel control, opposition activists told Reuters by phone.

The death toll was at least five, including one woman, and bodies and wounded people were being dug out from the rubble. Video footage from the area showed scores of people searching and digging in the debris of a flattened building.

On-scene details could not be independently verified due to Syria’s severe restrictions on international media access.

A businessman who went from the northwest of the city to Hananu to bury his grandmother – Aleppo’s main cemetery is situated in the district – said the ground was shaking with artillery explosions.

“I passed by several (rebel) Free Syrian Army checkpoints. The fighters looked quite relaxed. The army was nowhere to be seen but it was bombing heavily,” he said.

In the capital Damascus, the army continued to shell Sunni Muslim neighborhoods supportive of the revolt against Assad, whose minority Alawite sect has dominated Syria’s power structure for decades.

Shelling again struck the Palestinian refugee camp of Yarmouk in south Damascus and the adjacent impoverished neighborhood of Hajar al-Aswad, home to thousands of refugees from the Israeli-occupied Golan Heights.

Syrian state media said four people were killed in a “terrorist attack” that targeted a bus in the province of Homs. The London-based Syrian Observatory for Human Rights said civilians and soldiers were in the bus.

Assad, whose family has rule Syria for 42 years, has repeatedly said the revolt is the handiwork of Islamist “terrorists” and not a popular movement for democratic change.

U.S. Secretary of State Hillary Clinton said on Sunday she was pessimistic about closing the gap with Russia on how to defuse the Syrian conflict before world leaders gather for the U.N. General Assembly later this month.

Clinton said she made the case for increasing pressure on Assad in talks with Russian President Vladimir Putin and Foreign Minister Sergei Lavrov at a summit of Pacific Rim states in Vladivostok, Russia over the weekend.

“If we can make progress in New York in the run-up to the U.N. General Assembly, we can certainly try,” Clinton told reporters. “But we have to be realistic. We haven’t seen eye-to-eye on Syria. That may continue. And if it does continue then we will work with like-minded states to support the Syrian opposition to hasten the day when Assad falls.”

Chinese and Russian leaders restated their firm opposition to what they see as U.S. meddling in Syria, a reference to calls for harsh U.N. sanctions to isolate Assad, for whom Moscow is Syria’s most important ally and arms supplier.

“Our U.S. partners prefer measures like threats, increased pressure and new sanctions against both Syria and Iran. We do not agree with this in principle,” Lavrov said.

Clinton said she would continue to work with Lavrov to see if the U.N. Security Council could formally endorse an agreement brokered by former U.N. Syria envoy Kofi Annan which envisages a transitional governing authority for Syria.

But she added that such a step would only be effective if it carried specific penalties if Assad fails to comply – something Russia has repeatedly resisted.

Turkey, Saudi Arabia and most Arab nations have sided with their Syrian Sunni co-religionists at the forefront of the revolt.