Iraq , U.S. at odds over Iranian flights to Syria 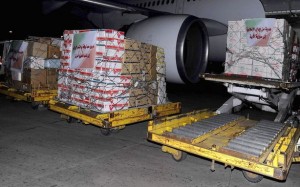 U.S. officials were angry today over reports that Iraq is allowing Iran to use its airspace to supply the embattled Syrian regime with military equipment, but Iraq demanded evidence to back up the American accusations.

Ali al-Moussawi, the spokesman for Iraq’s prime minister, said that the U.S. has not proven its claims that Iran is sending arms to support the forces of Syrian President Bashar al-Assad in the 18-month bloody civil war.

“The Iraqi government is carefully monitoring this issue both in the sky and ground,” al-Moussawi told the Associated Press. “Until now, there is no evidence of any violation in this regard, and if anyone has any evidence, they should bring it to us and we will take the needed measures.”

Vice President Joe Biden was supposed to provide the proof about a month ago but it was never received, al-Moussawi added.

State Department Deputy Spokesman Patrick Ventrell said today that the U.S. has had “several conversations” with Iraqi officials about the issue. Ventrell said the Iranians “will stop at nothing” in their quest to continue to help the Syrian government.

“Iranians have been so explicit and so clear about their unyielding support for the murderous Assad regime that it continues to be an item of concern for the international community,” he said.

Sen. Joe Lieberman, I-Conn., told the AP in Baghdad that Iraq’s failure to stop the flights could threaten the long-term relationship with the U.S. as well as aid Iraq could receive as part of a 2008 strategic pact between the two nations.

“Bottom line, this kind of problem with these Iranian overflights can make it more difficult to proceed with the Strategic Framework Agreement in the manner that the prime minister and we would like to see happen,” Lieberman said.

Ventrell stressed that Iraq is a sovereign country which is in control its own airspace, but that the United States would like for Maliki’s government to establish a requirement that any Iranian aircraft flying over Iraqi territory must land and be inspected before travelling onward.

He warned that the U.S. expects Iraq to abide by the U.N. Security Council ban on Iranian arm exports, as well as honor the strategic partner agreement between America and Iraq.

Iranian flights carrying military equipment to Syria had been stopped earlier this year, but resumed in July, according to a report today by the New York Times citing senior American officials.

Iran is Syria’s strongest regional ally and is reported to have been supplying Syria with weapons, communications equipment and a wide range of training for its forces. A cargo plane was also provided to carry men and supplies around the country, U.S. officials told the Times.

“Today we are involved in fighting every aspect of a war, a military one in Syria and a cultural one as well,” a commander in Iran’s Revolutionary Guard, General Salar Abnoush, admitted last week, according to Iranian media.

Good relations with Syria are crucial for Iran’s ability to reach the Mediterranean and their Shiite allies in Lebanon, Hezbollah. Iran’s Shiite leadership has long supported the Assad regime whose core members belong to the Alawite sect, an offshoot of Shiism. Iraq, whose population and leadership are also predominantly Shiite, has not officially taken a side in Syria’s conflict but has been cozying up to Iran.

The Iranian flights raise big questions about the U.S.’s influence in Iraq after the nine-year war.

“This region is about to explode,” Sen. Lindsey Graham, R-SC, told reports in Baghdad today, according to the AP. “They’re in a pickle here…The reason they’re probably not pushing back on Iran is because they don’t see how this ends. There’s an amazing lack of American leadership, and it’s beginning to show on all fronts.”