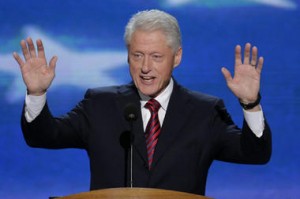 “But he has laid the foundations for a new, modern successful economy, a shared prosperity,” Clinton told the Democratic convention Wednesday night. “And if you will renew the president’s contract, you will feel it. You will feel it.

“Whether the American people believe what I’ve said or not may be the whole election. I just want you to know that I believe it. With all my heart I believe it,” Clinton said.

The former president, greeted by cheering Democrats like a rock star, acknowledged that too many Americans aren’t yet feeling the effects of recovery. 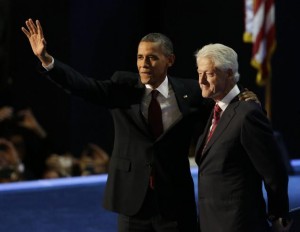 “Are we where we want to be today? No. Is the President satisfied? Of course not,” Clinton said. “But are we better off than we were when he took office?”

Delegates answered in the affirmative with a raucous standing ovation.

“When President Barack Obama took office, the economy was in free fall. … We were losing 750,000 jobs a month. Are we doing better today? The answer is YES.”