Geagea urges the Christians to be themselves 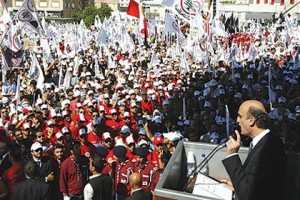 During the annual “Memorial Mass for the Martyrs of the Lebanese Resistance” Geagea pointed out that   that the bilateral relations between Lebanon and Syria should be based on the interests of the two countries and called for abolishing all  the security agreements between Lebanon and Syria and the suspension of the Higher Lebanese-Syrian Council, “which were held during the tutelage stage as they were held during compelling circumstances.”

He also urged the Christians to be themselves by holding onto their values  and not to be scared about the changes taking place in Syria, stressing that the Christians in the Middle East are part of its history.

“We, the Christians, can only be ourselves: revolutionaries, free people, pioneers of democracy and human rights, advocates of justice, equality, openness, progress and development,” he said and added

“The dictator regimes are the sources behind  the questioning of the existence of Christians in the Middle East after their collapse.”

Geagea  described the Syrian regime as “the regime of detentions and graves, and the real axis of evil ”  and urged the Lebanese people to “ show sympathy  for the Syrian people’s pain and suffering.”

“The truth  about the Syrian regime  has been revealed. In Syria they are killing innocent men, elderly people, women and children. They are destroying cities and villages the same way they did in Lebanon,” Geagea said.

Geagea added:  “The regime in Syria is not facing a foreign plot, as it has been claiming all along but it is facing    facing a national popular revolution in  all sense of the word. For this reason despite the use of the biggest killing machine in the Arab spring uprising the regime failed in crushing the uprising .  In the  peaceful stage of the revolution   the millions of Syrians that took to the street  nearly overthrew the regime through popular tide.  Despite the weakness and internal division of the opposition the revolution continues  and is achieving progress day after  day . The battle of Aleppo which the regime has dubbed  “mother of all battles” and which has been going on for five weeks clearly  illustrates to the skeptics the strength of the revolution which has been able to hold onto  a big bite of the city”

Turning to the situation in Lebanon, Geagea denounced  the cabinet’s performance and “silence over Syrian troops incursions in Lebanon .”

He also blamed the “dreadful” economic situation on the cabinet, and   called on the Lebanese citizens to vote against the  Hezbollah led March 8 alliance  in the upcoming 2013 parliamentary elections.

Commenting on the recent  release of one of the longest serving Lebanese prisoners in Syria after 27 years in jail, Yaaqoub Chamoun,  Geagea  said:

“The Syrian regime has claimed that it no longer had Lebanese detainees in its jails except for those charged with criminal offenses. Chamoun’s release proves  that the Syrian regime is lying… and confirms that we still have Lebanese people detained in Syria who are still alive,” Geagea said.

He also called on the cabinet to “form a crisis cell to follow up on the cause of the Lebanese detainees in Syria.”