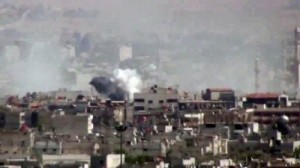 BEIRUT , Lebanon – Syrian rebels claimed on Wednesday they had destroyed five helicopters at a military airport between the northern cities of Aleppo and Idlib, after a watchdog reported fierce clashes there.

A video published by Al-Jazeera appeared to show a number of burned-out helicopters that it claimed belonged to Assad forces. Another video uploaded to YouTube by the Free Taftanaz opposition group appeared to show Syrian Free Army forces attacking the Taftanaz airport from a distance.

Taftanaz airport has been used by President Bashar Assad’s forces as a base of operations for military helicopters and aircraft, and has been the target of several attacks by Syrian rebels, AFP reported.

Abu Mossab, a rebel who participated in today’s attack, said via Skype that the rebels had shelled the Taftanaz military airport with two captured military tanks and had destroyed five military helicopters. The claims could not immediately be independently verified.

Fierce fighting broke out at the airport between government troops and rebels near the airport earlier in the day, prompting helicopter gunships to launch attacks on the nearby town of Taftanaz, the Syrian Observatory for Human Rights said.

The Observatory reported that 14 government troops were killed in the fighting at Taftanaz, while two rebels and one civilian died elsewhere in Idlib province.

Explosions could be heard from the airport, a base for fighter planes and helicopters running sorties over the rebel strongholds of Aleppo and Idlib, the Britain-based watchdog said.

The airport has been the target of several attacks in past weeks by insurgents entrenched in Aleppo and Idlib, which have suffered daily shelling by government troops.

In Aleppo city, where the army and rebels have battled for over a month for control, fierce clashes broke out between the two sides in several districts, according to the watchdog.

And in Damascus, activists reported a third straight day of army attacks on rebel strongholds in the eastern outer belt of the city, collectively referred to as East Ghuta.

The Local Coordination Committees, a network of activists on the ground, said warplanes and helicopters bombed and strafed all the East Ghuta suburbs, while the Observatory reported attacks by combat helicopters on the eastern suburb of Saqba as well as shelling further into the city in the district of Zamalka.

Meanwhile, clashes broke out between rebels and government troops in the east Damascus neighbourhood of Qaboon and five civilians were killed in nearby Jubar neighbourhood, the Observatory said.

The Syrian Revolution General Council, a local network of opposition activists, reported fierce shelling, along with artillery fire, throughout the eastern limits of the city.

In the suburb of Kfar Batna, it said that mortar fire was landing at the rate of one shell per minute over densely populated areas and farmland, while nearby Irbin was also being shelled.

In the central city of Homs, the districts of Old Homs, Khaldiyeh and Juret al-Shiyah came under army bombardment, while one person was killed in shelling on the town of Rastan, the Observatory said.

The violence followed a bloody day on Tuesday in which the Observatory reported that 189 people were killed countrywide: 143 civilians, 14 rebels and 32 soldiers.

The watchdog says that over 25,000 people have been killed since the uprising against President Bashar al-Assad’s rule broke out in March last year.