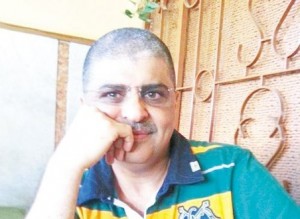 Voice of Lebanon 93.3 reported that Lebanese security forces arrested   Ghazi Khamis Arafat who was identified as the brother of the wife of the  kidnapped  Kuwaiti citizen  on suspicion of involvement in the abduction.

This comes after Kuwaiti citizen Issam al-Houti, 52 was kidnapped by gunmen in the area of Hawsh al-Ghanam in the eastern Bekaa valley on Saturday. The assailants then sped away in their Mercedes car heading towards Baalbek.

Lebanon’s Ambassador to Kuwait Bassam al-Naamani reiterated to Kuwait’s Al-Seyassah newspaper Sunday that Houti was not kidnapped for political or security reasons.

“It was an individual incident whereby some sides sought to exploit the currents tensions in Lebanon in order to commit this deplorable act,” he added.

Photo: Issam al-Houti, the abducted Kuwaiti citizen. Ghazi Khamis Arafat who was identified as the Houti’s brother-in-law was arrested over  suspicion of involvement in the abduction.