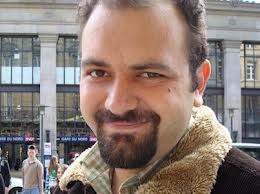 Security forces in Syria have arrested a filmmaker and an actor who helped people made homeless or jobless by President Bashar al-Assad’s forces, their friends said on Friday, part of an apparent crackdown on the country’s secular intelligentsia.

Arwa Nairabiya – who founded the “Damascus Dox Box” documentary film festival – was arrested at Damascus airport on Thursday evening before boarding a plane to Cairo, fellow filmmakers and relatives said.

Secret police agents also raided the home of Mohammad Omar Oso, an actor who had starred in several popular television series, and took him to an unknown destination, the Damascus Media Centre activists’ group said in a statement.

Thirty-five year-old Nairabiya was part of a new generation of Syrian filmmakers who had defied a state ban on independent film production even before the revolt against Assad began 17 months ago.

“It seems it is a crime to establish an independent cinema movement in Syria,” said fellow Syrian director Ahmad Malas, in a video statement recorded at an undisclosed location outside Syria. “We call for freedom for Arwa Nairabiya, actor, producer and graduate of the Syrian Higher Cinema Institute who is always smiling.”

One of Nairabiya’s friends, speaking from Damascus on condition of anonymity, said he feared for his safety. “We pray that Arwa gets off lightly. The regime has been brutal toward Syria’s intellectuals,” the friend said.

The Syrian state has a Soviet-like monopoly on cinema and television production. The establishment shunned Oso, who is also in his 30s, when he refused to join the state-controlled actors’ guild and sign statements declaring support for Assad at the start of the revolt, his friends said.

Nairabiya has championed the cause of human rights and freedom of expression in the face of state attempts to control culture through institutions that monopolize teaching of art, film and dance to support the personality cult of Assad.

Syrian security forces, who have arrested tens of thousands of people since the uprising began, do not comment on detentions, which human rights groups say are arbitrary.

Assad has claimed to have introduced what he regards as far-reaching political reforms in response to pro-democracy street demonstrations, yet strict state restrictions on freedom of speech and artistic expression have remained in place.

Three months ago, Assad’s forces shot dead Bassel Shehadeh, another young filmmaker who had abandoned a Fulbright scholarship in the United States to document a military crackdown on the central city of Homs.

In another incident, authorities blamed “treacherous hands” for the killing earlier this month of director Bassem Mohiedine in a Damascus suburb rocked by clashes between the military and rebels. No one has claimed responsibility for his death.

In a third case, the relatives of sculptor Wael Qastoum said he died last month after being tortured in a Damascus prison.

Qastoum, a Christian from Homs, had spoken out against state repression, said a relative who asked not to be named.

Witnesses said pro-Assad militiamen, known as shabbiha (ghosts) beat novelist Khaled Khalifa earlier this year after he attended a funeral for Rabih Ghaza, an activist who was found shot and stuffed in the trunk of his car near a security branch in Damascus.

Many of the new generation of filmmakers have been inspired by French-educated Syrian director Omar Amiralay, who made international award-winning films that chronicled what he regarded as Syria’s demise under the Assad family’s rule.

Amiralay died of natural causes at age 66 one month before the uprising broke out, having famously warned Assad that Syria “is marching steadfastly on its hooves to its own demise, after being betrayed by its rulers.”