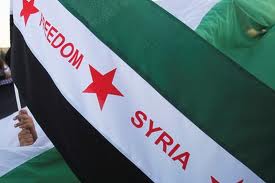 Rebels fighting the government of Syrian President Bashar al-Assad are a diverse group, ranging from young civilians with no military experience to seasoned soldiers who defected from the army. But they all have the same goal, the end of the Assad regime which considers them to be terrorists.

Captain Maan Mansour was a pilot in the Syrian military. He abandoned his post three months ago and joined the rebels of the Free Syrian Army.

“I defected because the Assad regime was killing women and children and innocent people,” said Mansour. “All they wanted was democracy and freedom. What was the crime of all these people he killed?”

Mohammed Badr Abbas, 20, was a store clerk until a year ago. He says he marched peacefully in the anti-government demonstrations. But when he saw the violence he decided to join the rebels.

“We are fighting for a principle, not for money, but for our freedom and dignity as human beings,” said Abbas. “The Syrian army troops fight as a job whereas we fight for Allah [God].”

Many of those who join the rebels have no military training. Abu Mahmoud is a baker who now commands an FSA brigade fighting in Aleppo.

“Training? They don’t need training. All these guys know how to handle a weapon,” said Mahmoud .

Ahmed Ghazali, 31, was a captain in the Syrian army until he defected early this year. Now he is in charge of security for the rebel-held town of Azaz, northern Syria.

“The most important challenge facing us now is to satisfy the wants of the people and improve their lives,” said Ghazali. “They have many needs and we are working on them. We are the servants of the people, unlike during the time of Assad when the people were his slaves.”

Abbas says the rebels, despite their different backgrounds, all have the same dream.

“We hope to free the country from this unjust regime and to see a smile on the faces of the children,” he said.

The under-equipped rebels face shortages of ammunition and increasing government air attacks against which they have no weapons.

They say they supply food and fuel to the local population while aiding the growing number of people who have been displaced by the fighting.

But the Syrian government, trying to root out rebels with military attacks, says they are illegally taking over villages and causing the refugee exodus.