UN: Syria has ‘chosen the path of war’ 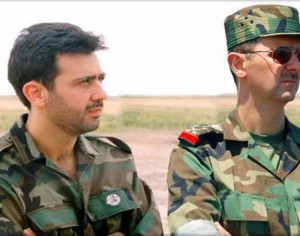 Syria’s government and rebels have “chosen the path of war”, a U.N. peacekeeping chief said as the world body ended its doomed monitoring mission to Damascus and deadlock persists among world powers over how to contain the spreading conflict.

Two weeks after former U.N. secretary-general Kofi Annan quit as mediator in frustration with the failure of a four-month-old truce, military observers have no peace on the ground to monitor and U.N. officials said on Thursday the last of the few dozen remaining team members would quit Damascus by Aug. 24.

“It is clear that both sides have chosen the path of war, open conflict, and the space for political dialogue and cessation of hostilities and mediation is very, very reduced at this point,” said deputy U.N. peacekeeping chief Edmond Mulet.

At a time when fighting is raging around Syria’s biggest city, Aleppo, and tit-for-tat sectarian kidnappings have spread the Syrian conflict into fragile neighbouring Lebanon, Western powers and Russia remain resolutely at odds in the Security Council over the fate of President Bashar al-Assad.

Syrian rebels, who launched offensives following a bombing on July 18 that killed key Assad lieutenants in Damascus, may have taken heart from Western and Gulf Arab sources saying on Thursday that the president’s feared brother Maher, a senior military figure, had lost a leg in that bomb attack.

However, a Lebanese politician with close ties to the Assad administration said he doubted Maher had been badly wounded. And Syria’s foreign minister, while not addressing the report directly, scoffed at rebel hopes; Walid al-Moualem told state television that talk of defeating the army was “delusional”.

Moscow, which advocates a transitional peace in which Assad might play a role, criticised the United States, which says the Syrian president must step down immediately. Russia’s diplomats said Washington had shown a lack of commitment to Annan’s tattered April peace plan by its insistence that the monitoring mission, UNSMIS, should be wound up when its mandate expired.

Diplomats from the major powers, along with key Arab governments and Turkey, will meet at the United Nations in New York on Friday to discuss what comes next.

The international mediation effort, such as it is, at least seems likely to have a new figurehead; Algerian diplomat Lakhdar Brahimi, a veteran of troubles in Iraq, Afghanistan and elsewhere, has agreed to take over as peacebroker on Syria but with an altered mandate, U.N. sources said.

Envoys said he had demanded “strong support” from the Security Council and one source said that Brahimi would not continue with Annan’s “failed approach”.

U.N. peacekeeping official Mulet said: “The situation on the ground is extremely difficult. But the fact that it’s difficult doesn’t mean that we should not face that challenge of trying to open those political spaces in the future.”

In the meantime, the price being paid by the Syrian people was underlined by the U.N. humanitarian chief, Valerie Amos, who said during a visit to the country that as many of 2.5 million people, about one tenth of the population, were in need of aid.

Across Syria’s borders, the conflict is rippling out along the sectarian and ethnic faultlines of the Middle East.

Long a rare Arab ally of Tehran, Assad depends increasingly for support on his Alawite minority, whose faith is an offshoot of the Shi’ite form of Islam practised in Iran. Against him are ranged insurgents largely drawn from Syria’s Sunni Muslim majority, who have backing, if largely rhetorical so far, from the West, as well as Sunni Arab leaders in the Gulf and Turkey.

The gunmen said a Turkish hostage would be the first to die if their kinsman held by Syrian rebels in Damascus were killed.