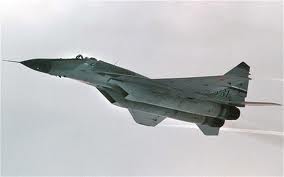 The Syrian government has begun to use its air power to try to crush a 17-month-old uprising.

The footage shows a warplane streaking through the skies amid heavy gunfire. The jet suddenly erupts into flames and begins to swirl, leaving a trail of smoke.

“God is greatest! A Mig fighter jet has been hit in the town of Mohassen,” the activist shouted. There was no indication from the video that the jet had been hit by rebel gunfire or an anti-aircraft missile.

An opposition source working with rebels in the area told Reuters the rebels used anti-aircraft guns to down the jet.

“It was a Mig-21 brought down by a 14.5 anti-aircraft gun, the biggest in the rebel arsenal. The plane was flying too low and was within range. We have no information whether the pilot survived,” the source said.

Update: The Syrian government admitted that a warplane has crashed , but claims it was due to technical malfunction.

“Syrian military plane crashed in the east of the country after the pilot was forced to leave because of a malfunction and the search is ongoing to find him”, official Syrian news agency SANA reported