Iran quakes death toll rises to 250, as search goes on 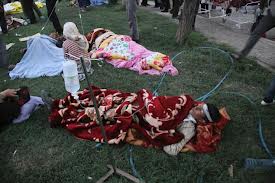 Rescuers in Iran are searching through the rubble of collapsed buildings for survivors from two strong earthquakes which left at least 250 people dead.

The 6.4 and 6.3 quakes struck near Tabriz and Ahar on Saturday afternoon, and more than 1,800 are believed injured, many in outlying villages.

Thousands have been spending the night in emergency shelters or in the open.

Relief agencies are trying to provide the survivors with tents, bread and drinking water.

Reports say phone lines to many villages have been cut off, confining rescuers to radio contact and, analysts said, probably masking the true scale of casualties.

“The quake has created huge panic among the people,” one resident of Tabriz told the BBC. “Everyone has rushed to the streets and the sirens of ambulances are everywhere.”

The towns of Haris and Varzaqan in East Azerbaijan province in north-western Iran were among those that suffered casualties, local crisis committee chief Khalil Saei told state TV according to the Associated Press.

State TV said at least six villages were totally flattened, with 60 other villages sustaining damage ranging from 50% to 80%.

‘My family is terrified’

Dozens of rescue workers have been sent to the region, but relief efforts have been limited overnight.

“Unfortunately there are still a number of people trapped in the rubble but finding them is very difficult because of the darkness,” news agency Fars quoted national emergency head Gholam Reza Masoumi as saying.

Almost all deaths seem to have been confined to rural areas, local disaster officials said – probably because buildings in the cities are more sturdily constructed.

An Iranian Red Crescent official estimated that 16,000 people had been given emergency shelter after they were forced to leave their homes.

President Mahmoud Ahmadinejad’s office posted a statement on its website expressing condolences to those in the disaster zone and calling on authorities to “mobilise all efforts to help the affected populations,” the AFP news agency reports.

A provincial official has warned people in the region to stay outdoors overnight because of the risk of aftershocks. 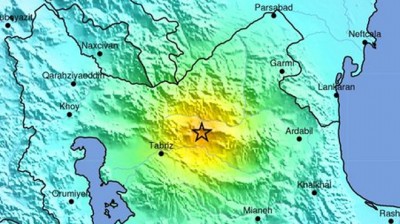 My family is really terrified. It is night time now but we cannot sleep,” Tabriz resident Amina Zia told the BBC.

“This earthquake was… very strong and violent.

“There were around 10 aftershocks, which lasted a total of 10 minutes.”

The second earthquake struck just 11 minutes after the first, said the US Geological Survey.

Iran straddles a major geological fault line, making it prone to seismic activity. In 2003 an earthquake in the city of Bam left 25,000 people dead.