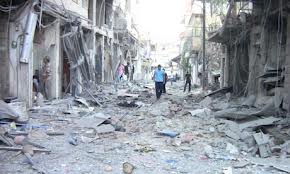 Zabadani town, which is located west of Syrian capital Damascus and in the center of a green valley, has turned into a ruin due to the crackdown by Assad forces with heavy weapons.

Maya Zabadani, a local activist, told AA via internet on Friday that Assad forces hit the town with heavy weapons, and dozens of houses were damaged or destroyed, while tanks and armored vehicles crushed business places.

People, who are under artillery fire everyday, are scared to go out, said Zabadani, adding that those, who were able to flee, were going to secure zones and Lebanon.

Noting that Zabadani had been a town of vacation for businessmen coming from Gulf countries, the activist said that many businessmen had their summer houses in the town but now the prices of the houses dropped in half from millions of dollars.