Egypt’s Christians form their own Brotherhood 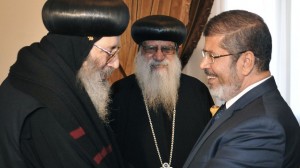 A former leader of the Muslim Brotherhood occupies Egypt’s presidential palace, leaving many of the country’s Coptic Christians deeply anxious about their future.

Now, a new group calling itself the Christian Brotherhood has emerged, vowing to stand up for the rights of Copts.

On a Cairo rooftop recently, members of the new Christian Brotherhood are debating how to respond to the first major outbreak of Muslim-Christian violence since President Mohammed Morsi came into office in June.

The incident in the village of Dahshour, south of Cairo, began as a personal spat between a Christian and a Muslim in a local laundry. It quickly escalated into communal violence, and eventually the entire Christian community — about 100 families — fled the village.

“This is the first time that we see this incident where the entire community fled for their life for fear of serious retribution,” he says.

A few families have since returned to the village, only to find their homes in ruins.

The 73-year-old spiritual father of the Christian Brotherhood, Michel Fahmy, occasionally dabs his eyes with a handkerchief as he speaks about the Dahshour events.

“To leave your houses, your properties, and forcing you to vacate your city, your village — it’s a drama,” he says.

Bahgat says that the number of interreligious incidents has decreased this year compared with last year, when several churches were destroyed and 27 Copts were killed by the military at a protest in Cairo. And yet, with the rise of Islamist political power, Bahgat says, there is a noticeable rise in fears and tensions.

“And there’s a general sense of anxiety among the Christian community, and that is something that the government needs to address,” he says.

But the Christian Brotherhood isn’t counting on the government, or their own church, to address discrimination and violence.

The Christian Brotherhood’s Fahmy says the Copts don’t need anyone to stand by their side. They will stand with each other first, he says, and then find others standing with them.

The Christian Brotherhood says that it has some Muslim members, including a retired major general, who support its efforts — including its intention to become a full-fledged political party.

The group has already stirred controversy. Naguib Gobrail is the lawyer for the Coptic Church.

“In general, I don’t approve this, because it divides society [into] two sections — a Muslim section and a Christian section,” he says.

Gobrail worries that a group like the Christian Brotherhood could heighten existing tensions between Muslims and Christians.

Who Will Speak For Egypt’s Christians?

The group is also challenging the political authority of the Coptic Church, an institution at a crossroads since the death last March of Pope Shenouda III, who led the church for 40 years. Beloved by much of the Coptic community, the pope was also controversial.

Amir Ayyad, a member of the Christian Brotherhood, says Shenouda was making political decisions for the entire community.

“He prevented the Copts from being involved in politics, and because of this, after his death, he left behind an army of Copts with no background in politics, or very little background,” Ayyad says.

But this may be changing. The Christian Brotherhood is one of several new, independent Coptic movements that hope to weigh in on politics. Bahgat, the human rights activist, says these groups emerged as a reaction among younger Copts to what they saw as the failure of their own church leadership to take a firm position against discrimination and violence.

“Ultimately, this is going to come with a lot of tension, because the church is going to want to maintain control, but also because ultimately it’s much easier for the state to deal with the church than an unorganized, huge Coptic population of 10 percent of Egypt’s 80 million people,” Bahgat says.

As the Coptic community prepares for the selection of a new pope later this year, the debate about who speaks for them will continue.

Photo: Then-President-elect Mohammed Morsi greets Coptic Bishop Bishoy (left) as Bishop Bakhomious looks on, at the presidential palace in Cairo in June, in this photo released by Egypt’s official news agency. The election of Morsi, of the Muslim Brotherhood, has unnerved many Christians, who make up about 10 percent of Egypt’s population.