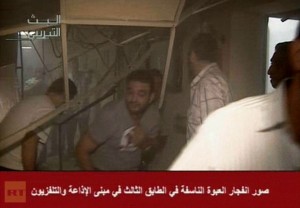 A bomb exploded on the third floor of a Syrian state television and radio building in Damascus on Monday, state media said.

The television station, which continued broadcasting, carried an interview with Information Minister Omran al-Zoabi who said some employees were slightly wounded in the blast. There were no deaths.

“There is a lot of damage,” Zoabi said.

“I’m in the … radio and television building and everything is working and will continue to work. We have a lot of studios and equipment,” he said.