Syria: An Aleppo neighborhood has become a ghost town 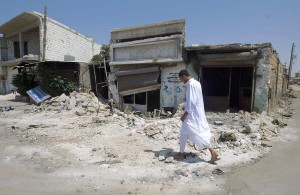 ALEPPO, Syria — In a two-room apartment where the paint is peeling off the walls, a woman talked about the bombardment of her neighborhood as her granddaughters, ages 3 and 4, sat nearby clutching teddy bears.

“They tell me, ‘Grandma, tell them not to hit us, not to injure us, not to kill us,'” said the woman, who like others in this article didn’t want to give her first name. “We’re just civilians. What’s our crime? We’re not with this side or this side.”

Two weeks into a fierce Syrian government offensive in Aleppo, few residents remain in the Salahuddin neighborhood, where some estimate more than 100,000 used to live in addition to hundreds of displaced families fleeing the shattered city of Homs who found cheap housing here.

A few residents briefly returned to the neighborhood in the middle of last week, taking advantage of a decrease in shelling to grab a few items they had left behind.

But some families haven’t been able to leave.

“Where are we going to flee?” asked the grandfather of the two girls, along with two other children.

“It’s hard. There’s nothing here, there’s no bread, there’s no electricity,” the grandmother said, adding that she is usually too fearful to walk in the streets. “Since the shelling began, I don’t know what is happening outside my home.”

Their neighbors are all gone, to relatives in other parts of the city or to schools and mosques that have been turned into shelters. But this couple’s relatives live in areas that are also being shelled, and they say they are too poor to leave anyway.

Fighters from the opposition Free Syrian Army come by to give them bread and formula and diapers for their 8-month-old grandson, the man said.

Two young men who returned to Salahuddin a week after fleeing said that, from a nearby neighborhood, they had watched helicopters and warplanes fly above their home. They found that their home had been spared, but they expected it was just a matter of time: The buildings to the right and the left had been struck.

“We didn’t believe it at first,” one of the men said, who refused to give his name. “We didn’t expect the government would shell Salahuddin.”

At night the streets are deserted, and the only light comes from the moon and the ends of cigarettes. Normally this part of the city would be buzzing after nightly Ramadan prayers, when people break their fast and stay up late.

Ahmad Saed, a 24-year-old activist, walked in near-darkness along the edges of buildings — which provide a modicum of protection, or at least the sense of it — as the sound of shelling sounded disturbingly close.

“We’ve become a city of ghosts,” he said.