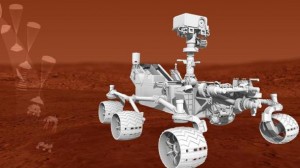 After a journey of 354 million miles, a spacecraft approaching Mars at 13,200 mph is on course to land inside its sweet spot early Monday.

The landing is one of the riskiest ever tried, and the descent is what NASA officials call “seven minutes of terror.”

Nonetheless, the spacecraft carrying the Mars rover Curiosity is on target “to fly through the eye of the needle” and touch down within its five-by-13-mile landing elipse, said Arthur Amador, mission manager of the Mars Science Laboratory. “We’re . . . in as good shape as we could hope for.”

Yet with so much riding on the $2.5 billion mission, he said at a news conference, “we’re often reminding each other to keep breathing.”

The spaceship is on course to enter the Martian atmosphere at 1:24 a.m. Eastern time on Monday.

Because the rover is so much larger, more complicated and more ambitious than earlier models, it has to land in a new and far more hazardous way. The landing, which could never be tested in full on Earth, includes a hovering rocket stage, a kind of sky crane, to lower it to the ground. NASA’s chief scientist John Grunsfeld has said that because of that heightened landing difficulty, in addition to the unprecedented sophistication of the instruments on board, Curiosity is “the most important NASA mission of the decade.”

Anxious engineers and scientists will be waiting for a touchdown “beep” — which comes as computer code — that will report a safe landing. It could come as early as 1:31 a.m.

Several hours of silence from Curiosity are quite possible, officials said, since the rover’s signals can be received only if the Mars orbiters that will relay its messages are in precisely the correct location.

But if nothing is heard from the orbiters or through the Deep Space Network after about 18 hours, said MSL deputy project manager Richard Cook, then it’s time to start worrying about the fate of the mission.

The Curiosity landing is shaping up to be an international spectacle. Formal “landing” parties have been scheduled from South Australia to Rome, from Israel to Crete; and in the United States from Atlanta to Seattle, Milwaukee to Honolulu.

NASA also has helped organize a landing gathering in New York’s Times Square, which will feature a large screen that will beam the streaming news from atop a building and high above the crowd.

Reaching, orbiting and landing on Mars is notoriously hard. In addition to the European Space Agency, nations including the United States, the former Soviet Union, Russia, China and Japan have sent missions to Mars since the late 1960s, but only about one-third of them have succeeded.

The United States is the only nation to land a vehicle on Mars and complete its mission, having done it six out of seven tries.

The Soviet Union was the first to touch down on the Martian surface, but that 1971 mission ended 14 seconds later when all communication ceased.

NASA’s confidence in the mission is reflected in the aggressive way it’s trying to bring it to the public, from landing-based X-box games to those many parties.

But reflecting the ever-present possibility of failure, Mars Exploration program director Doug McQuiston said: “If we’re not successful, we will have learned from it. We’ll pick ourselves up, dust ourselves off and do it again.”

The first Mars pictures expected from Curiosity will be relatively primitive fish-eye black-and-white images that will have been transmitted either within the first few minutes after touchdown or two hours later, when the orbiting Odyssey satellite again passes over the landing site.

Higher-resolution and color images from other cameras could come later in the week, and a video filmed of the last minute of the landing from the vehicle will be released weeks later, because it will take longer to download.

Curiosity is not only the most expensive and ambitious mission ever sent to another planet, but it also has a formal goal unattempted by NASA since the Viking landers of the mid-1970s: a search for the building blocks of extraterrestrial life. The rover carries three chemistry labs that will search for carbon-based organic material and Martian habitats where life once may have flourished.

An army of 700 engineers and scientists is converging at the Jet Propulsion Lab to watch and tweak the landing, and then to hopefully begin the slow process of getting the rover ready for operations.

The earliest tests will begin within a day of landing, but moving, digging soil and drilling rocks won’t take place for weeks or months, agency officials said.

Curiosity is the first rover to land any place on Mars other than a flat plain. Because of advances in landing technology, it will touch down instead in Gale Crater, a large and ancient hole in the ground about three miles deep.

At its center is Mount Sharp — named after California Institute of Technology planetary scientist Robert Sharp — which will offer geologists and planetary scientists their first opportunity to observe and analyze the history of the planet as laid down in its exposed rock layers.

Temperatures in the crater are expected to range from 10 degrees during the day to 100 degrees below zero at night. The rover has a nuclear-powered battery that it uses to create the heat needed to keep the rover from freezing and the electricity to move its wheels and to operate its 10 instruments.

As the landing approaches, a potentially disruptive dust storm in southern Mars being monitored by NASA’s Mars Reconnaissance Orbiter appears to be dissipating, according to JPL’s Ashwin Vasavada, deputy project scientist for Curiosity. “Mars is cooperating by providing good weather for landing.”