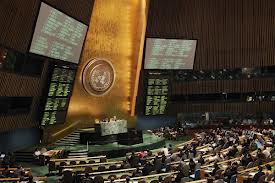 The U.N. General Assembly on Friday overwhelmingly voted to condemn the Syrian government and demanded a political transition in Syria, which has seen 17 months of fighting between forces loyal to President Bashar al-Assad and opposition fighters.

The 193-nation assembly approved the Saudi-drafted resolution, which expressed “grave concern” at the escalation of violence in Syria, with 133 votes in favor, 12 against and 31 abstentions. Dozens of other countries, including many Western states, co-sponsored the resolution.

As expected, Assad’s staunch ally Russia was among the 12 countries that opposed the resolution in the assembly, where no country has a veto but all decisions are non-binding. Others that voted against it included China, Iran, North Korea, Belarus, Cuba and others nations that often criticize the West.

Some countries did not participate in the vote.

The resolution has the assembly “deploring the failure of the Security Council to agree on measures to ensure the compliance of Syrian authorities with its decisions.”

It also calls for “an inclusive Syrian-led political transition to a democratic, pluralistic political system.”

The United States and European powers blame Russia for the deadlock on the 15-nation council. Last month Russia and China joined forces in their third double veto on Syria to strike down a resolution that would have called for an end to the violence and threatened Damascus with sanctions.

Many of the elements from the latest vetoed resolution were included in the text the assembly approved on Friday.

Russia blames the West for the Security Council deadlock, accusing it of encouraging and supporting Syrian rebels.

U.S. Ambassador to the United Nations Susan Rice welcomed the adoption of the resolution.

“Despite the continued opposition of an increasingly isolated minority, the overwhelming majority of U.N. members clearly stands resolutely with the Syrian people as they seek to fulfill their legitimate aspirations,” Rice said.

Britain’s U.N. Ambassador Mark Lyall Grant told reporters after the vote that a “colossal majority” supported the resolution, which had been revised to remove language explicitly backing Arab League calls for Assad to step down and urging states to implement sanctions against Damascus.

But the resolution still welcomes an Arab League decision calling for Assad to step aside, without giving details of that decision.

Those revisions secured the support of dozens of countries that might have opposed it otherwise, U.N. diplomats said.

Saudi Arabia’s Ambassador Abdallah al-Mouallimi said “the number of votes in favor has exceeded all of our expectations.”

French Ambassador Gerard Araud, president of the Security Council this month, also welcomed the adoption of the resolution, but said it was unfortunate the council has been unable to act the way that the assembly did.

“The Security Council is blocked,” he said. “I don’t see how we could move forward on this issue.”

Syrian Ambassador Bashar Ja’afari, after the vote, complained that the meeting was “another piece of theater” organized by the Qatari president of the General Assembly, Nassir Abdulaziz al-Nasser, to pursue his country’s agenda.

Saudi Arabia and Qatar support the rebels determined to oust Assad. Ja’fari repeated his country’s accusations that both are supplying weapons to the opposition, adding that Friday’s “resolution will have no impact whatsoever.”

Earlier U.N. Secretary-General Ban Ki-moon told the assembly that the brutality in Syria’s biggest city, Aleppo, where forces loyal to Syrian President Bashar al-Assad and rebels continue to face off in bloody clashes, may be crimes against humanity.

“As we meet here, Aleppo … is the epicenter of a vicious battle between the Syrian government and those who wish to replace it,” Ban said.

“The acts of brutality that are being reported may constitute crimes against humanity or war crimes,” Ban said. “Such acts must be investigated and the perpetrators held to account.”

Both sides accuse the other of summary executions and mass killings in Aleppo.

Ban also reiterated his concern about the deadlock on the U.N. Security Council. “I have said many times how much I regret the divisions that have paralyzed action in the Security Council,” he said.

He repeated that he intended to replace U.N.-Arab League mediator Kofi Annan, who announced on Thursday his intention to step down at the end of August.

Annan said the deadlock on the 15-nation council was among the factors that had undermined his peace efforts. Annan also said that neither side in Syria appeared to want peace, a point Ban echoed on Friday.