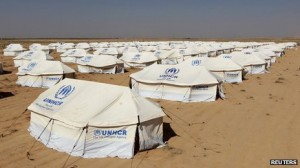 A dry, hot wind blows across the Jordanian desert, coating a freshly pitched city of tents with a fine film of dust.

“No-one would want to live in a tent here,” admits Andrew Harper, head of the UN’s refugee agency, the UNHCR, in Jordan.

But for hundreds of Syrians fleeing across the border every day, Jordan’s first official refugee camp is their only safe haven from the growing violence at home.

On Saturday night, nearly 2,000 Syrians are reported to have made the increasingly dangerous escape to Jordan, marking what officials describe as a dramatic increase in the exodus.

“We tried for months to delay the opening of official camps,” reflected Jordan’s Foreign Minister Nasser Judeh. “We have our conscience…but we also have our realities on the ground.

“A lot of Syrians came here over the past 15 to 16 months and stayed with family and friends, but it puts a burden on resources like water, health, education and energy, ” he told me, against the backdrop of a long straight line of empty, cream coloured tents flapping in the desert wind.

The authorities will gradually begin moving the first 5-600 refugees from some of the overcrowded “transit camps” into this new facility.

Initially, the UN expects to house 10,000 refugees here, but it has been given enough land to eventually provide for 100,000 people.

“Jordan is providing the land, the water, the electricity but what we need is money, it’s as simple as that,” underlined the UNHCR’s Andrew Harper.

“Everyone talks about refugees, but helping refugees is something different, ” he insisted. “We hope that in the holy month of Ramadan Jordan’s neighbours, particularly in the Gulf, will step forward and do more.”

Jordan has long been a refuge for people fleeing in waves in a troubled neighbourhood. But it has put the kingdom under constant strain with its meagre natural resources, fragile economy, and its own political fault lines.

The foreign minister said 142,000 Syrians had arrived in Jordan over the past year. The UN says some 37,000 have registered as refugees and the numbers are expected to keep climbing.

“Seventy-five per cent of the refugees are women and children,” pointed out Maria Calivis, Regional Director for Unicef. “They make heroic journeys to get here from their homes in Syria.”

“Now these tented camps are a new level of challenge, an immense challenge,” she told me as we made our way through a row of tent pegs.

On Friday, six-year-old Bilal died en route to Jordan. The little boy was shot dead by Syrian forces as he let go of his mother’s hand when the whole family, including his father, a soldier, tried to flee. There are also reported to have been “minor clashes” as Jordanian border guards tried to provide covering fire.

The incident highlighted the risk of tensions spilling across the border, drawing Jordan deeper into this crisis.

“We are extremely vigilant, ” emphasised foreign minister Judeh, who said families often came under Syrian fire as they tried to escape. “Nothing comes ahead of our own security.”

Jordan is carefully vetting those who cross legally, and keeping on eye on the many more Syrians who enter illegally, including defectors and activists.

Sources say another reason why Amman delayed the establishment of a highly visible refugee camp is the impact it could have on already strained bilateral relations with Damascus.

Both watch each other warily, fearing efforts to destabilise their own internal politics.

Jordan has been able to keep a lid on its own small but unprecedented protests, responding to calls for change and against corruption with a limited programme of reform.

Its own politics have long been complicated by its neighbours’ violent conflicts.

“Jordan is full,” said Mr Harper. “Aside from the Syrians, there are still Iraqi and Palestinian refugees here.”

“Look at the situation in Damascus, Aleppo, Deraa, and Homs. This is a real crisis.”

It is a crisis, affecting all of Syria’s neighbours, that is not going away anytime soon, which means the refugees look set to stay too.