Inside the rebel base in a Syrian school 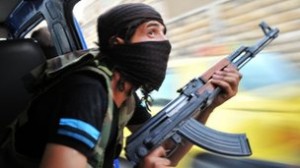 As the battle for Aleppo intensifies, the Syrian army and rebels have sent reinforcements to the country’s second city. Ian Pannell visits a school that has been taken over by rebel fighters, who are now using it as their base.

She was the girl with no name. When we returned to the rebel base, she was lying on her back on the floor, where she appeared to be sleeping. The teenager had a pale complexion and wore a pretty red dress, her lower body draped in a blanket.

I noticed our translator, sat at her side, was crying. I had been wrong, the girl was not sleeping – she was dead, killed in a government artillery strike, the blanket masking her wounds.

“Who is she?” I asked. No one knew. She had been found in the road near to where the shell had landed. A nameless victim of a war where it is the blameless who suffer the most.

This was the scene in one of the classrooms of the local primary schools, now a temporary rebel base. When the war came to Aleppo, the children were kept at home although many of them have now fled the city, along with their families.

Today the corridors are filled with the sounds of gunmen checking their weapons, the animated talks of attacks being planned, of shouting, crying and praying – and of dead bodies. 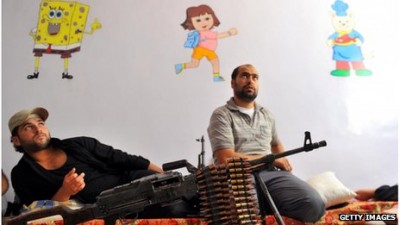 A government tank captured by the rebels had been parked just outside the school gates on a patch of rough ground. When a military helicopter attacked the area, the tank’s massive anti-aircraft gun was turned towards the sky where it erupted with a ferocious roar.

What had been a playground was now a staging area for rebel vehicles, where men and munitions, food, medical supplies and prisoners are ferried in and out.

A constant stream of detainees was brought to the base – men accused of being members of the Shabiha, a feared government militia that has been implicated in some of the massacres committed in this war.

They were dragged in, hands tied behind their backs, many bearing the marks of having been beaten. Some cried as they were brought in, pleading with their captors that they were innocent. Others were more defiant.

Most were held in a classroom. But standing next to a cupboard where pens and textbooks were once stored, I heard the sound of knocking. At first I could not work out where it was coming from. Then it became clear. It was inside the tiny metal cupboard where those prisoners deemed to be the highest threat were being held.

Later a group of them were bundled into a van. I asked one of the fighters where they were going. “To see a judge,” he replied.

“Will they be killed?” I asked. He looked at me. “If the judge decides they have got blood on their hands, then yes, they will be killed.”

This is a brutal conflict where the line between right and wrong has become blurred. Human rights abuses are being committed by both sides, although pro government forces bare the vast brunt of responsibility.

The United Nations estimates that more than 10,000 people have died in this conflict. Activists say it is far more than that.

In the course of just a few hours at the school we witnessed the number of dead rise. First there was the deathly crash of an artillery shell smashing to the ground nearby, shaking the windows and sending everyone running for cover.

The government says it only targets rebel fighters – men it calls terrorists. But what their artillery shells invariably hit are civilians, and in this case someone’s house.

The victims were rushed into the school and another classroom that has become a makeshift clinic.

Pools of blood on the floor marked a terrible trail to where two young boys were being treated.

In one bed eight-year-old Mohammed wept and cried out for his father. “Baba, Baba” he said.

Shrapnel from the shell pock-marked his small body and he screamed as the fragments were gouged out.

In the other bed lay his older brother. He was dead.

It is a mark of how war brutalises a society when a school is a morgue for children, classrooms are emergency clinics and store cupboards prisons.

In the space of a week Aleppo has become the main battleground in this conflict. The city is the largest in the country and its economic capital. Neither side can afford to lose here. And as a government counterattack gathers pace, so more children will die, as Syria seems to pull itself apart.