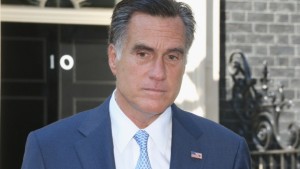 In his first trip abroad as a presidential candidate, Mitt Romney intended to show off his strength as a statesman. Instead, he made a number of bungles — and in their traditional fashion, the British press tore him apart for it.

Romney’s recent remarks that “there are a few things that were disconcerting” about the management of the London Olympic Games prompted British leaders to defensively respond to the American politician. Then, in a meeting with Labour party leader Ed Miliband, Romney called Milliband “Mr. Leader,” seemingly forgetting his name. Romney also confirmed he met with the head of Britain’s MI6 intelligence agency — something he should’ve kept under wraps.

By 5 p.m. ET, the British press was having a field day. The center-left newspaper the Guardian led their website with the headline, “Mitt Romney’s Olympics blunder stuns No 10 and hands gift to Obama.” Referring to Romney’s “disconcerting” comment, the Guardian quoted a senior Whitehall source, who said, “What a total shocker. We are speechless.”

The Guardian also ran a sidebar entitled, “Oh, Mitt: those Romney gaffes in full.” The article dissected Romney’s gaffes and rated them all on a scale of one to 10. The “disconcerting” comment received a rating of eight on the gaffe scale. “Take that, Romney! Now get that horse out of my sight,” the Guardian wrote in the blog post, in reference to Ann Romney’s horse, Rafalca, which will compete in the Olympics.

The Telegraph, a traditionalist, center-right paper, ran commentary from foreign correspondent Alex Spillius under the headline “Romney doesn’t like us? We shouldn’t care.” The subheadline of Spillius’ story read, “Mitt Romney is perhaps the only politician who could start a trip that was supposed to be a charm offensive by being utterly devoid of charm and mildly

The Times, a center-right publication, ran a couple harsh headlines, including “PM delivers Olympic putdown to Romney.” That article cites two unnamed “diplomatic” sources, one of whom says of Romney’s visit: “It is worse than Sarah Palin in terms of basic diplomacy.” The other source said of Romney: “There is none of the stardust of his opponent.”

The website for center-left paper The Independent led with the headline, “Mr Leader? Did Mitt Romney forget Ed Miliband’s name?” The article was among the most-viewed on the site and had the most comments of any story on the site.

The Observer, a center-left paper, ran two articles on Romney’s gaffes: “David Cameron hits back at Mitt Romney over London 2012 doubts” and “Mitt Romney’s Olympics blunder stuns No 10 and hands gift to Obama”. The stories weren’t featured prominently on the website, but they did account for the two most popular stories on the site.

Romney can take solace in the fact that a few tabloids, such as The Mirror, didn’t run any stories on Romney’s gaffes, choosing instead to focus their coverage on a model reading “50 Shades of Grey.”