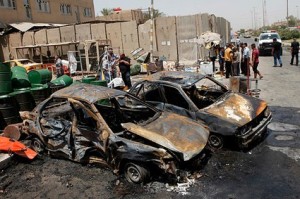 Bombings and shootings ripped across Iraq on Monday, killing at least 106 people in the deadliest day in more than two years. The coordinated attacks in 15 cities sent a chilling warning that al-Qaida is slowly resurging in the security vacuum created by a weak government in Baghdad and the departure of the U.S. military seven months ago.

Though there was no immediate claim of responsibility, the leader of al-Qaida in Iraq declared last week a new offensive aimed at sowing instability across the country..

Iraqi militants have kept up a steady drumbeat of deadly attacks since the U.S. pulled out in December, ending nearly a decade of war. They have sought to increase the chaos created by the deepening sectarian political crisis that pits Sunni and Kurdish leaders against Shiite political powers.

“Al-Qaida is trying to send a message that it is still strong and can choose the time and places to attack,” said Shiite lawmaker Hakim al-Zamili, a member of parliament’s security and defense committee. He said weaknesses in Iraq’s ability to gather intelligence about terror plots, or stop them despite security checkpoints has shown how toothless the government is in protecting its people.

Al-Zamili also raised the specter of al-Qaida infiltrating security forces. If these gaps are not closed quickly, he said, “the attacks and explosions will continue and al-Qaida will be stronger.”

In one brazen assault on Monday, three carloads of gunmen pulled up at an Iraqi army base early Monday near the northeastern town of Udaim and opened fire, killing 13 soldiers before escaping, two senior police officials said.

The deadliest attack, however, took place just north of Baghdad in the town of Taji, where a double bombing killed at least 41 people. The blasts were timed to hit as police rushed to help victims from a series of five explosions minutes earlier.

Monday’s violence bore most of the hallmarks of al-Qaida: the bombings and shootings all took place within a few hours of each other and struck mostly at security forces and government offices — favorite targets of the predominantly Sunni militants. And most of it happened in the capital and in northern areas the terror group used to control and where they now stand the best chance of regaining a foothold.

More than 200 people also were wounded in the onslaught Monday, Iraq’s bloodiest day since a string of nationwide attacks on May 10, 2010, killed at least 119 people. Spokesmen for Iraq’s government and Shiite Prime Minister Nouri al-Maliki could not be immediately reached for comment.

Iraq’s Interior Ministry, which oversees the country’s security, condemned the attacks, calling them a “flagrant violation” of the ongoing Muslim holy month of Ramadan. It said security officials now planned to devise a new strategy to protect the public, but said complaints about the security gaps were “not useful.”

For years, al-Qaida in Iraq has been seeking to re-assert its might, although U.S. and Iraqi officials insist it is nowhere as strong as it was when the nation came to the brink of civil war between 2006 and 2008.

The militant group made a series of missteps shortly afterward — targeting civilians, imposing overly strict Islamic discipline, alienating tribal leaders — that undercut its support in Iraq’s Sunni communities and helped lead to the widespread defection of fighters to groups allied with the U.S. The flow of funding, arms and fighters slowed to a trickle, and al-Qaida in Iraq since has struggled, but failed, to command much power.

But the militant group’s local wing — known as the Islamic State of Iraq — is now seizing on the vacuum left by the Americans and Baghdad’s fragmented government.

Baghdad political analyst Hadi Jalo said al-Qaida in Iraq, as a Sunni group, feels emboldened by the success of the Sunni-dominated uprising in neighboring Syria against Damascus’ Alawite rulers. The Alawites are an offshoot of Shiite Islam.

“It is leading a sectarian war and Iraq is part of its war and ideology in this region,” Jalo said.

In a statement issued Saturday, the leader of al-Qaida’s affiliate in Iraq warned that the militant network is returning to strongholds from which it was driven from while the American military was here.

“The majority of the Sunnis in Iraq support al-Qaida and are waiting for its return,” Islamic State of Iraq leader Abu Bakr al-Baghdadi said in the statement that was posted on a militant website.

The local wing of al-Qaida, known as the Islamic State of Iraq, has long been at odds with al-Qaida’s central leadership. The global network’s current leader, Ayman al-Zawahri, has in the past criticized Iraq’s movement for targeting civilians. But earlier this year, al-Zawahri softened his stance, and included ISI militants in a network plea for fighters to join the Syrian uprising.

Previous al-Qaida offensives have failed to push the country into civil war, largely because Shiite militias in recent years have refused to be lured into the kind of tit-for-tat killings that marked Iraq’s descent six years ago. Additionally, for all its weaknesses, the Iraqi government now holds more authority than it did during those dark years, and, by and large, citizens have no desire to return down that path.

Still, the militant group appears to be banking on Iraq’s fragility in its campaign to throw it into permanent chaos. Sectarian tensions have risen due to a political crisis stemming from terror charges the Shiite-led government has filed against one of the country’s vice presidents, who is one of Iraq’s top Sunni officials. He says they are politically inspired.

Mohammed Munim, 35, was working at an Interior Ministry office that issues government ID cards to residents in Baghdad’s Shiite Sadr City neighborhood when a car exploded outside, killing 16 people.

“It was a thunderous explosion,” Munim said from his bed in the emergency room at Sadr City hospital. He was hit by shrapnel in his neck and back. “The only thing I remember was the smoke and fire, which was everywhere.”

Most of the cities and towns pounded by bombs Monday are located in Sunni-dominated areas that nonetheless include sizable pockets of ethnically- and religiously-mixed populations.

Attacks struck the Baghdad suburb of Hussainiya, northeastern Diyala province, five towns around Kirkuk and in the oil-rich city itself as well as the northern city of Mosul — a former al-Qaida stronghold, police said.

Only one of Monday’s attacks occurred in undisputed Shiite territory: a bomb in the southern town of Diwaniyah that police said killed three people and wounded 25.

All of the casualties were confirmed by police and health officials who spoke on condition of anonymity because they were not authorized to release the information.