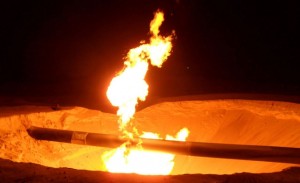 Attackers on Sunday blew up a gas pipeline in Egypt’s Sinai used to export fuel to Israel and Jordan, the 15th such attack since 2011, the official MENA news agency reported.

Witnesses told AFP they heard a loud explosion and saw flames from the site of the explosion near the northern Sinai town of El-Arish.

Bedouin militants are believed to be behind the spate of pipeline attacks with have occurred since a popular uprising overthrew veteran president Hosni Mubarak in February 2011.

Egypt has been gripped by security problems since the revolt, and the Sinai peninsula is particularly sensitive because of tensions with its heavily armed Bedouin community.

An official in the company that manages the pipeline said exports of gas to both Israel and Jordan had been halted since an explosion that hit the pipeline in April and that the flames were caused by residual gas.

Residents in El-Arish, however, said gas shipments had begun three days ago through the pipeline, which at one point supplied Israel with about 40 percent of its natural gas.

Egypt in April terminated its agreement to supply gas to Israel because of what it said was a business dispute.

Cairo froze supplies to Israel earlier this year to negotiate a new price. Several Mubarak-era ministers and businessmen have been tried and imprisoned for selling the gas to Israel at below market rates.

No group has claimed responsibility for the attacks on the installation that crosses the increasingly volatile Sinai Peninsula. Security in Sinai was relaxed after the fall of Mubarak as the police presence thinned out across Egypt.