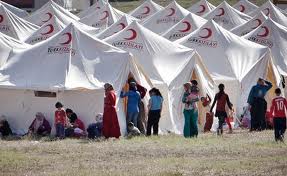 THREE more Syrian generals have crossed into Turkey, bringing to 24 the number of generals who have fled the unrest in Syria.

“Ten officers including one general fled to Turkey overnight (Thursday),” said the diplomat, speaking on condition of anonymity.

Turkey has given sanctuary to dozens of defectors who have formed the Free Syrian Army in opposition to President Bashar al-Assad’s regime.

Turkey is providing sanctuary to more than 43,000 Syrian refugees who have fled the violence and been accommodated in camps near the border. The camps also shelter rebel forces made up of army defectors.