A Virginia man was sentenced to 18 months in federal prison on Friday for providing information to the Syrian secret police about US-based dissidents protesting the Syrian government’s crackdown.

Mohamad Soueid of Leesburg, Va., allegedly turned over 23 audio recordings and nine video recordings to Syrian intelligence officials in Damascus. The recordings were made in and around Washington, D.C., and were intended to silence, intimidate, and potentially harm the protesters, according to federal officials.

Mr. Soueid, a naturalized US citizen of Syrian heritage, was charged in a six-count federal indictment with conspiring to act as an agent of a foreign government and with making false statements.

In March, he pled guilty to a single count of failing to register as an agent of a foreign government. That was the basis for the sentenced handed down on Friday by US District Judge Claude Hilton in Alexandria, Va.

“Mr. Soueid betrayed his country to work on behalf of a state sponsor of terror,” added US Attorney Neil MacBride.

“While the autocratic Syrian regime killed, kidnapped, intimidated, and silenced thousands of its own citizens, Mr. Soueid spearheaded efforts to identify and intimidate those protesting against the Syrian government in the United States,” he said.

Soueid’s lawyer, Todd Richman, said in a court filing that his client acted out of fear that Syria would be overrun by religious extremists.

“As has recently happened in Egypt, he fears that the current political upheaval in Syria will result in radical Islamists taking control of the country – and imposing Sharia law on those who live in Syria, including his many friends and family members who remain in the country,” the lawyer said.

“Mr. Soueid now realizes that he went too far in his activism,” Mr. Richman wrote.

Federal officials say Soueid was directed to recruit individuals in the US to make audio and video recordings of protests against the Syrian government. He also gathered information about dissident leaders, the logistics of protests, and internal conflicts within the movement, officials said.

In April, Soueid attended a meeting of dissidents in Alexandria. In addition to reporting the content of discussions at the meeting, he allegedly revealed contact information, including phone numbers and e-mail addresses, of known individuals in the US opposed to the Syrian government. 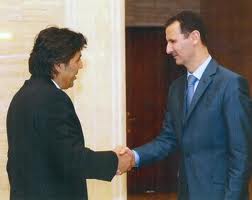 In June 2011, Soueid traveled to Syria. The day before his departure he spoke with Syria’s ambassador in Washington. While in Syria, he met with government officials, including a private meeting with Syrian President Bashar al-Assad, according to court documents.

He was later presented an expensive Hablut watch by one of Mr. Assad’s associates, documents say.

Prosecutors asked Judge Hilton to sentence Soueid to five-to-seven years in prison. Soueid’s lawyer urged a term of 12 months and a day.

“By illegally acting as an agent of Syria, Mr. Soueid deceived his adopted country of the United States in support of a violent and repressive despotic government,” said James McJunkin, assistant director in charge of the FBI’s Washington field office. “Through today’s sentencing, he will now be held accountable for his actions.”