by yalibnan
1758
The Assad family’s 41-year hold on Syria appears to be nearing its inevitable bloody end. Most dictators depart no other way, and it seems clear that time has run out for Bashar Assad,
Share: 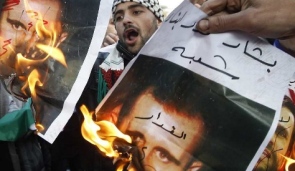 The Assad family’s 41-year hold on Syria appears to be nearing its inevitable bloody end. Most dictators depart no other way, and it seems clear that time has run out for Bashar Assad, who took over upon his father’s death in 2000.

What began 17 months ago as scattered protests against the regime, violently suppressed, has metastasized into civil war, with a Sunni majority rebelling against a ruling ethnic and religious minority that was beholden to the Assads for its power and perks.

The rebels, at first loosely organized, reached a level of organization at which they were capable of planting a bomb in a tightly guarded government quarter of Damascus that on Wednesday killed the defense minister, the deputy defense minister (who is also Assad’s brother-in-law) and a former defense minister. A fourth member of Assad’s inner circle died of his injuries yesterday, while another was wounded in the attack.

Despite the regular army’s advantage in weapons — especially helicopter gunships, supplies and presumably superior training — it has been unable to quell the rebellion that has spread deep into Damascus.

On Thursday, Assad made a rare appearance on TV for the new defense minister’s swearing-in, but by all accounts it was a perfunctory appearance with no rhetorical attempt to rally the public around his faltering regime. In fact, it is widely rumored that Assad and his family are not in the capital but in a coastal city more conducive to a quick escape.

The rebels also took over a border crossing into Turkey, where many Syrians have fled, and another into Iraq, suggesting that they are now strong enough to have an extended reach.

There has been no formal international support for the rebels, although Turkey has tacitly offered sanctuary for the rebels to rest and refit. Other Arab nations, opposed to Syria’s close ties to Iran and its constant meddling in Lebanon, have almost certainly supplied the rebels.

But the United Nations has been limited to sending in 300 unarmed observers. Attempts by the U.N. Security Council to impose tougher sanctions have been vetoed by Russia and China three times, most recently on Thursday. U.S. Ambassador Susan Rice, commenting on Twitter, called the third veto “even more dangerous and deplorable” than the earlier ones.

The U.S. and other foreign nations could do little in Syria without giving credence to Assad’s charge that the unrest was the work of foreigners and their agents. The war has passed that milepost. It’s now time for the U.S. and its Arab and European allies to help the rebels prepare to establish a new government.